Multimedia Or Make Up Your Own Audio In Your Mind? 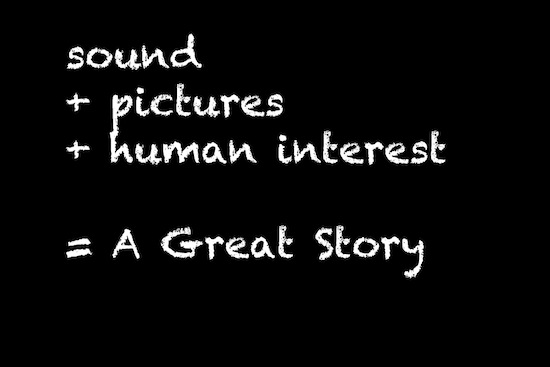 As my readers know, I've been privileged to attend the annual Foundry Photojournalism Workshop for the fifth consecutive time, every year teaching Multimedia For Photographers class.

But for those who don't know; the purpose and aim of this class is to show photojournalists how to make quick work of slide show production, using their own images and audio generated in the field, to produce cogent photo stories under the simulation of publishing deadlines, rivaling other multimedia forms in terms of quality.

At the end of Workshop, the instructors and staff gathered to discuss and suggest ways to improve it. The length of the multimedia presentations was one of the issues that came up.

As background, the majority of the remaining classes involved visual storytelling in one form or other, only two during the Workshop were actual 'multimedia', meaning they required photo (or video) essays AND field recordings gathered by students.

That said, this post deals with my class only..so back to the discussion.

One of the suggestions dealt with the length of my multimedia class presentations during the final evening of the Workshop. Although only averaging just over 2-1/2 minutes per project, it was felt by some that this was unfair, as the remaining non multimedia presentations were much shorter, causing the students not enrolled in either of the two multimedia classes to remark that they were shortchanged (that's my own interpretation) by being given less time to show their still photographs.

Looking back at the conversation, I have a couple of thoughts about this.

1. Setting aside other obvious differences for now, but audio slideshows (my kind of multimedia, and which is what my class is all about) provides much more 'magnetism' to photo essays/projects produced by my class participants. The audio carries the still photographs in a way that still photographs on their own cannot...especially with a large audience such as the presentation evening had. I certainly sympathize with the photographers who worked hard to present their very best photographs, but whose impact was lessened because of the absence of a meaningful aural accompaniment...an absence I call a "vacuum". To be honest, a part of me silently screamed my disappointment when I viewed a wonderful photo story with no sound to move along its linearity.

I highlighted the word meaningful in the preceding sentence...and that's a key word. There's an immense difference between the impact that ambient audio, as an accompaniment, adds to a photo essay....and just any kind of audio plucked from iTunes or elsewhere. I've viewed many wonderful photo essays spoiled by incongruous soundtracks that have absolutely nothing to do with the still photographs...and when that happens, my first reaction is always "huh?" then "noooo!".....certainly not the reaction the authors-creators of these projects hope for.

For presentations to a large audience, as the Workshop's last evening was about, I believe the projects with ambient audio will always steal the show. Being accosted by no less that two dozen photographers after the presentations, and told that they wanted to put their still photography work into a multimedia format and start ambient audio recording, not only reaffirmed this belief, but was also personally gratifying.

2. As for the duration of the audio slideshows, it has to be understood that it's determined by the story arc and/or theme...and by the logical pace of the project. It'd be foolish to force the pace of a story...and snip the audio down to a collection of incoherent babble clips just because the multimedia projects had to fit a cookie-cutter time frame. Editing an audio slideshow with no careful regard to the logical and measured pace of the project would be self-defeating, and impractical....and that is not going to happen in my class.

As I wrote in an earlier post: multimedia (whether as audio-slideshows -with ambient sound- or more elaborate productions) is the future, and photographers must hop on its train if they want to remain on the cutting edge of their industry, and retain the attention of viewers.
Unless, of course, they prefer to follow Yoko Ono who famously said: "All my concerts had no sounds in them; they were completely silent. People had to make up their own music in their minds!"
Posted by bella at 6:34 AM