During the long flight from Bangkok to London, I thought I'd write up a personal POV on the Fifth Annual Foundry Photojournalism Workshop (FPW) which was held in Chiang Mai from July 29 to August 4, 2012. This will be the closing post on the Workshop.
As my readers know,  FPW is an annual photo event held in various international locations, bringing well regarded photojournalists together to teach to emerging photographers and students who normally would not be able to afford workshops.

Firstly, as I always do, I tip my hat to Eric Beecroft, the visionary (he hates it when I describe him as such, but it's the truth) co-founder of the workshop, and the staff he assembled to support the logistics that such events require to function smoothly.
In my view, FPW Chiang Mai was the best organized of all the workshops that preceded it, although I have to stress that it shares that distinction with last year's FPW Buenos Aires. The availability of the very impressive (jaw-dropping, actually) facilities of the Chiang Mai University's Faculty of Arts were really a phenomenal attribute to this year's workshop.
I don't know if the other classes fared as well, but the two multimedia classes (Henrik Kastenskov's and mine) of the workshop were given large computer labs with about 50 iMacs, all connected to the internet, color balanced projectors and sound systems. Heaven on earth! Thank you, Chiang Mai Uni.
The choice of Yantarasri Resort as hotel accommodations for the instructors and staff was brilliant, as it was comfortable, posh, lovely and well run...plus within walking distance from the University where the classes and presentations were held....and I'm told it has a beautiful swimming pool. Its proximity to Nimmanhaemin, Chiang Mai’s most fashionable street, made it doubly better. After all, I got my daily fix of mango smoothies from a cafe a few steps away.
The location of Documentary Arts Asia for the portfolio reviews was grumbled about, since it wasn't very easy to find (at least for some map-challenged instructors), and it was space restricted as well. However, the availability of food, drink and masseuses during and after the portfolio reviews made up for the minor shortcomings.
More importantly, I have to laud the accomplishments of my class members. I don't really know how they managed it, but they were the fastest class I've ever taught in grasping Audacity and the concept of audio editing. I was taken aback at their speed/ease in using the nature of sound tools, so breathed a huge sigh of relief much earlier than I expected.
Alycia-Ray Down, Ahmed Shajee Aijazi, Adelina Abad-Pedrosa, Cheryl Nemazie, Amean J. and Christina Malkoun in my class produced disparately-styled audio slideshows, reflecting their interest and individual personalities. From the faith-based to the human touch, they all shone...not only with the quality of their productions  but also with their enthusiasm and single minded approach. My style is perhaps different from other instructors in as much I don't dictate what sort of projects my students ought to produce. They make the choice, and provided they feel for it and like it, I go along with their choices.
Here's where I may get into trouble, but this is my blog and I answer to no one anyway: in my view, the best three projects were Maika Elan's (Maggie Steber's class) Ain't Talkin' Just Lovin' (a lovely photo essay on young people and their pets), Ulises Baque's Oui Nan, a touching web-documentary on 93 years-old rickshaw driver in the Old City (Henrik Kastenkov's class), and Cheryl Nemazie's Night of the Naga (in my own class), a web-documentary of a small tattoo parlor. Yes, the latter two are multimedia projects...and I am certainly biased. Multimedia is the future...whether as web documentaries or as simpler forms of multimedia. 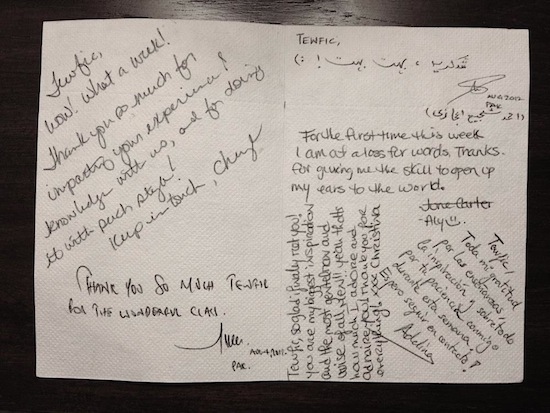 Finally, I was very touched in getting this sweet thank you card from my class. I always learn more from my class participants than they do from me...so it was I who should've given them thank you cards...but I did share a bottle of excellent red Merlot wine sent to me by Nadim Bou Habib all the way from Lebanon. I also have to express my appreciation at the lovely scarf that Christina Malkoun gifted me, and which I wore in the group's photograph.

In closing, all I have to say is that I was glad to renew/refresh my friendship with so many of Foundry alums, and equally happy to make new friends amongst the students...and look forward to seeing all of them in the future.
Posted by bella at 8:28 AM