As it turned out, I was free last weekend, so I went to the AMC website to see if there were any interesting trips planned. I saw that one of the group leaders I know was leading a beginner backpacking trip to the Catskills. I emailed her, and before you know it, I was along for the trip to help out.

The trip was to be in the Indian Head Wilderness Area. We would start at the Meads parking are and follow the trails Plalte Clove parking area. We would then shuttle back down to pick up the cars left at the starting spot. We would overnight at the Devil’s Point lean to site. There was no bushwhacking involved here. :)

So, at 8:30 AM we were ready to go. All together we had eight people in the group. While I am not in the picture, you can see my pack resting on the rock. 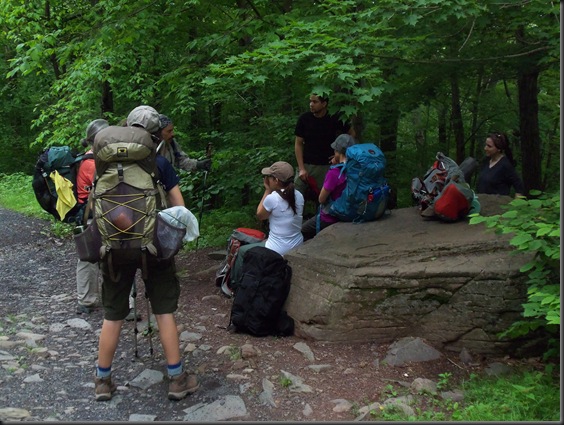 About two miles up the trail we reached some ruins of what used to be a hotel. There were several rebuilds on the site starting in the 1800s, but all that is left now are these ruins. 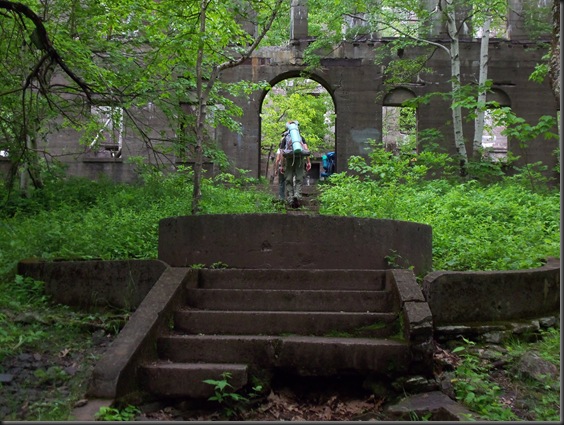 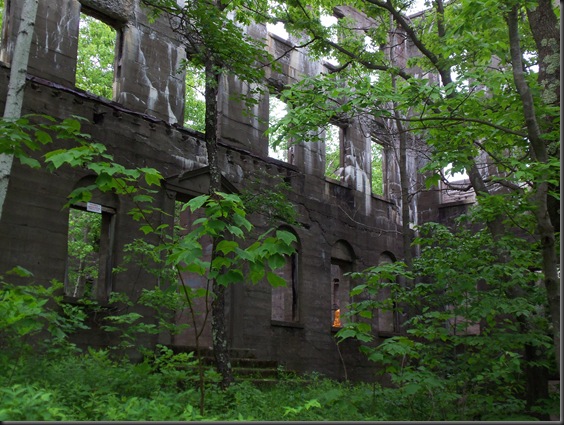 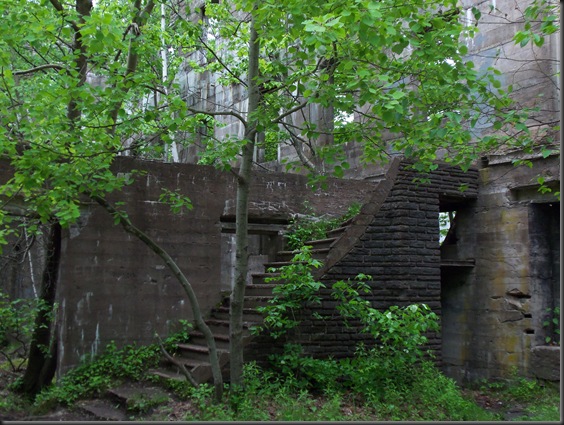 By this point it was lightly raining. Since the humidity was very high, I resisted putting on any rain gear. I would have gotten more wet from sweating inside the clothing, than I was from the rain.  Even so, as you can see I was rather wet at this point. 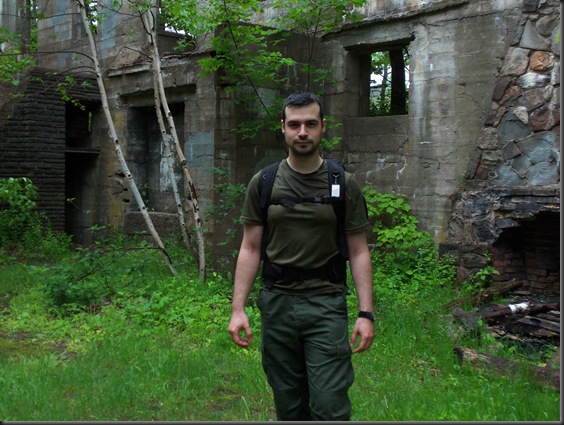 There was a clearly defined water source at this location. It seems to have been a part of the hotel. You can see the rain drops hitting the water. 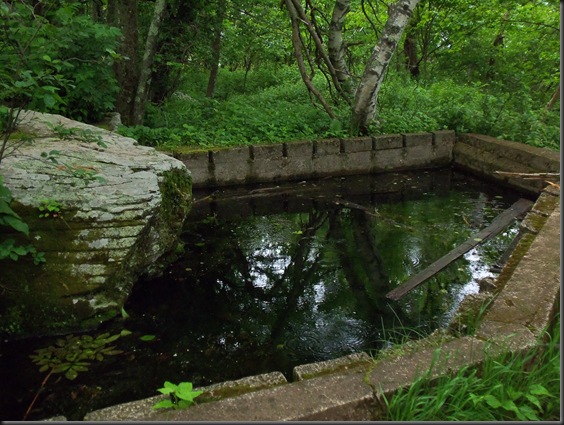 Eventually the trail climbed up to the ridgeline that we would follow for the rest of the day. Eventually we reached a fire tower that is maintained by the State there. It offered some great views. 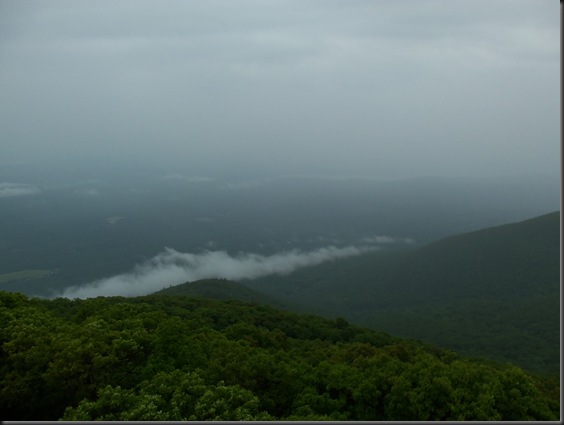 Unfortunately, the views confirmed that there will be plenty of rain to come. 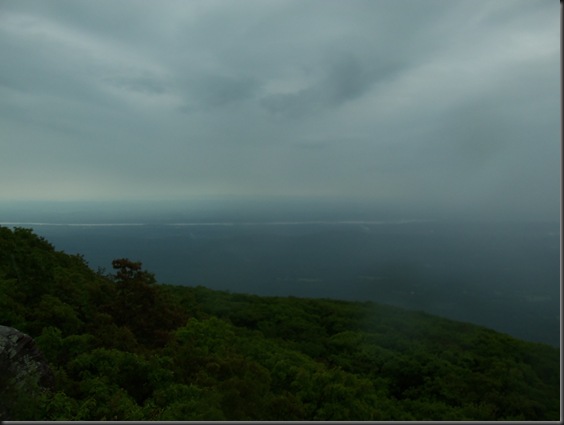 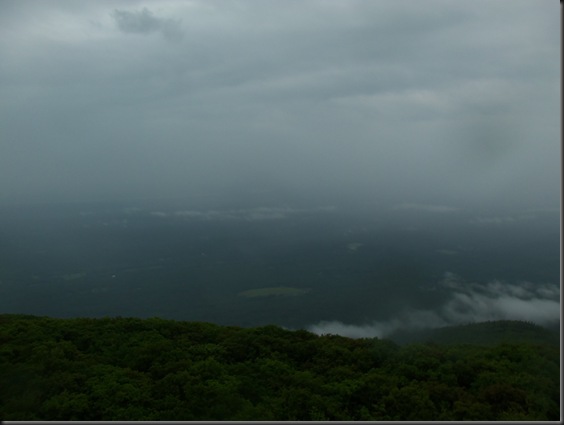 At this point we stopped for some lunch. I found a bit shelter from the rain under some trees. Nothing special, just some dried salami, a granola bad and some nuts. I like to keep food simple during the day. 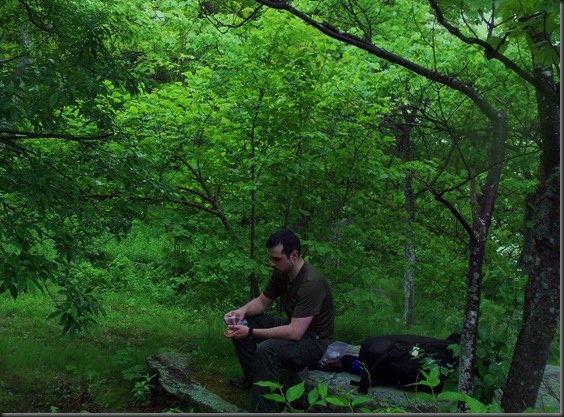 After lunch it was back on the trail. The rain was really coming down at that point, so my extremely low quality and extremely old rain gear had to come out. 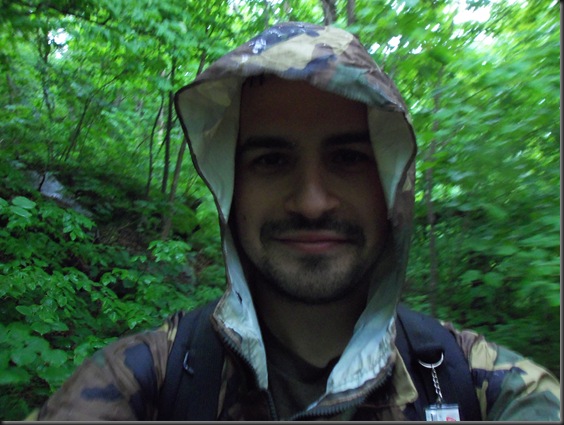 The rain brought out some of the water loving creatures. 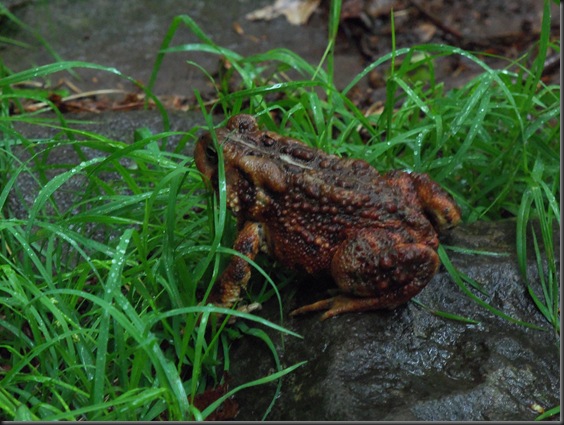 We got to the area where we had planned to camp fairly early in the afternoon. The rain had slowed down some, so we used the opportunity to set up. 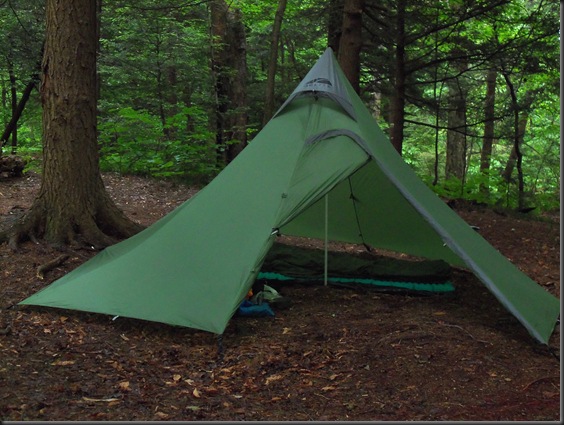 We had a great water source close by. Ordinarily, I would say that it was too close to where we were camped, but the temperature was low enough that the insects were not too much of a problem. I used the opportunity to fill up on water. I am still using the Sawyer Squeeze Filter, and I have been very happy with it. Absolutely no issues so far. 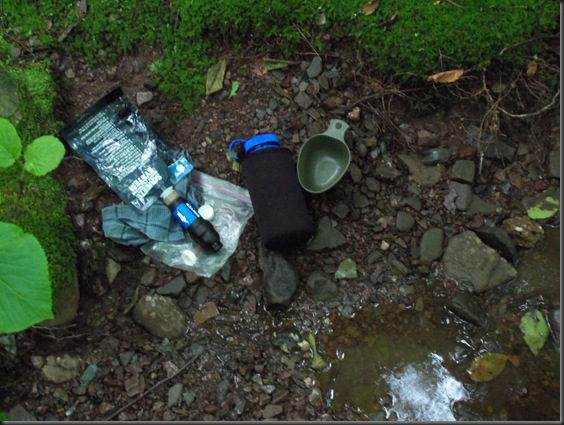 Since it was still early, we decided to go up Devil’s Path, and see if we can reach the top of the mountain. It would be a climb of about a twelve hundred feet, so we weren’t sure if we would burn out in the attempt. The going was not easy at all, especially with the ground being wet. We eventually got up to about three hundred feet from the top, and decided to call it a day. 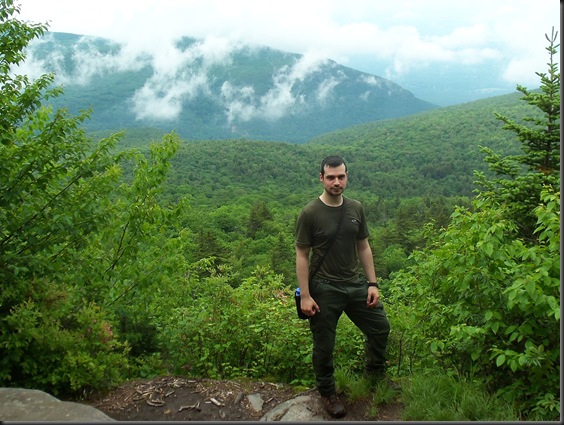 From there it was back to the camp site. There I spent a good chunk of the evening trying to get the camera to focus on a moth. 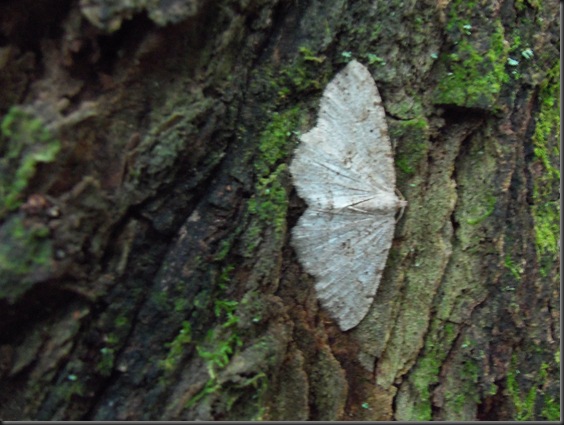 Now that the work for the day was done, I started dealing with some of the issues. The previous day had been a very hot one, so I expected more of the same for the weekend. All I had brought was an extra fleece shirt that I had been keeping dry in my backpack. The temperature was now hovering in an area around high 50F, where I wasn’t sure If that one shirt would be enough. On top of that, everything was wet, and there was little chance of drying it with the rain and humidity. I took off my wet shirt and put on the fleece. I was just warm enough in the evening. I figured I would be cold in the morning, as the temperature tends to drop late during the night.

So, I took off all my wet clothing, and got in the sleeping bag. The night turned out to be a warm one, so I wasn’t cold. When I woke up, I saw that as expected, all my clothing was still wet. I put it on, and got back in the sleeping bag to warm it up. If this was more than an overnight trip, I wouldn’t do that because moisture from the clothing will get in the sleeping bag, but I was headed home that day, so it would have a chance to dry out.

After breakfast, we hit the trail again. The salamanders were out and about since everything was wet. 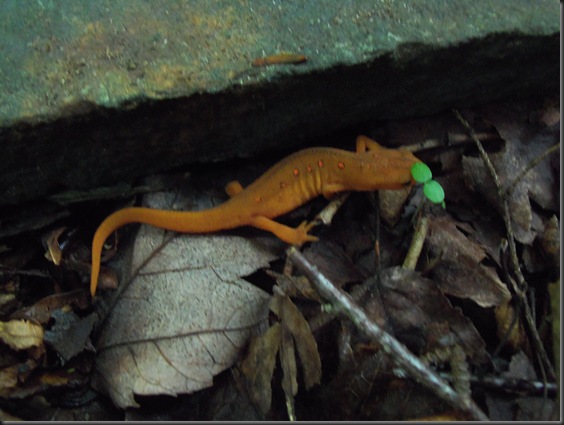 We also passed by an old rock quarry. It looked like there was quite a bit of mining done in this area. 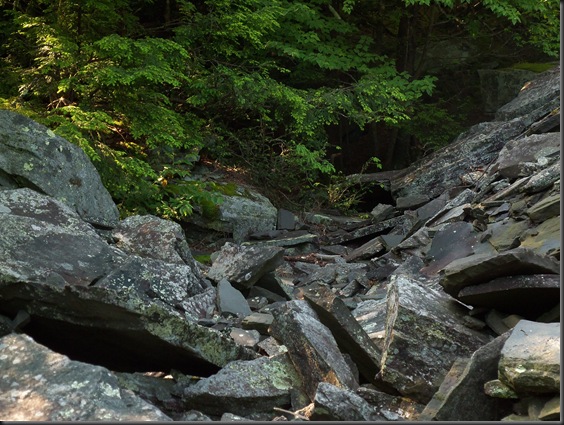 There were also remnants of an old road that was used to transport the stone off the mountain. At one time it was used as a trail, but had gotten washed out. 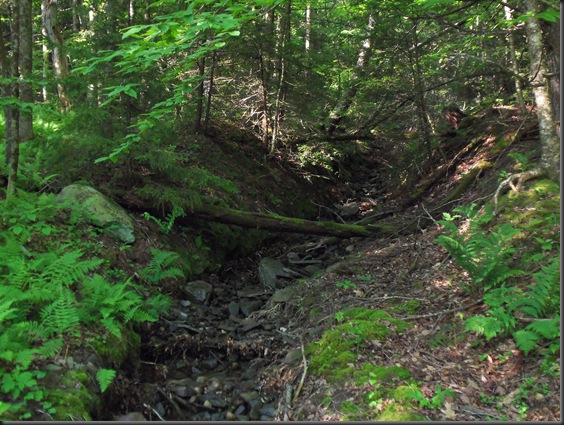 Towards the end of the trip, we passed next to a series of waterfalls. Some of them were a bit off trail, but a person in the group had lived there before and knew the locations. 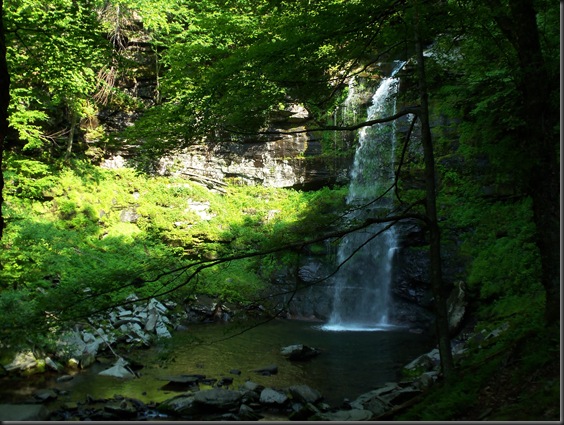 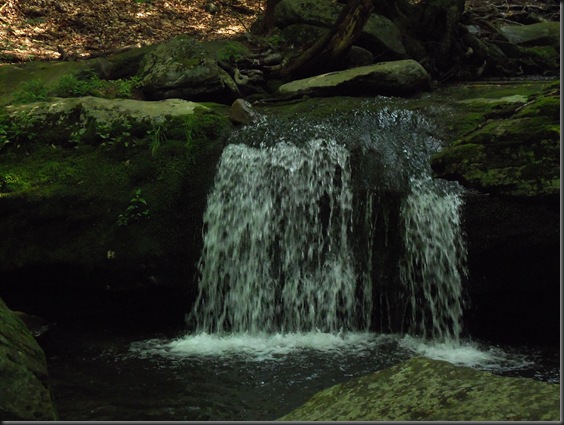 From there, it was back to the parking lot, and a bit of shuttling back and forth to the other location where we started on the trail. This time I managed to GPS the whole trip. The offshoot you see on the map to the right is where we went up Indian Head Mountain, and then went back. The small one on the left was the one to the ruins and fire tower earlier in the trip. 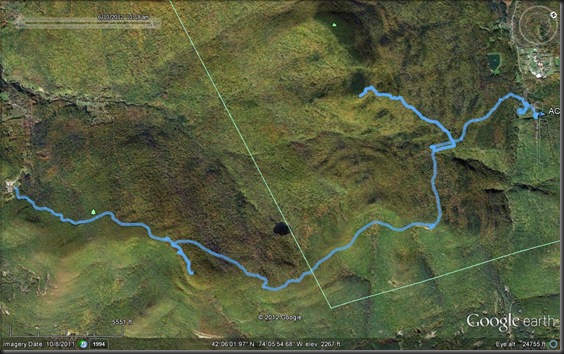 You can also see the elevation profile. Even though this was a beginner trip, it was actually a strenuous hike. We had some people who were having a hard time, and at the end of day one, I was about spent as well.

Anyway, it was a fun trip, and I’m glad I did it. The next one will be on 6/23/12 with a few guys from Blades & Bushcraft. We will be headed towards Hunter Mountain, which is fairly close to this location.