This is part two of Ozme’s set of posts about Finnish axes. For more indormation, please check out his blog Bush n’ Blade.

This image is taken from the Kellokoski catalog of 1922.

(Note: My skill of Finnish language sucks; I might understand it wrong….)

- Starting from the development of farming and livestock industry, the are grew to become a viledge of kellokoski in 1795. The Kellokoski tehdas or Mariefors Bruk, knowne as Kellokoski was the first manufacturing plant build in the area.

- The production plant has enjoyed its peak in mid-1800 with rod metal as the major product. But toward the end of 1800, the production downsized. Only forge works were in production at that time and in 1895, Kellokoski ironworks bankruptcies.

It seems so that Kellokoski was larger scale operation than Billnäs was. Also so far, I have seen Kellokoski’s axes and tools more available in flea markets. 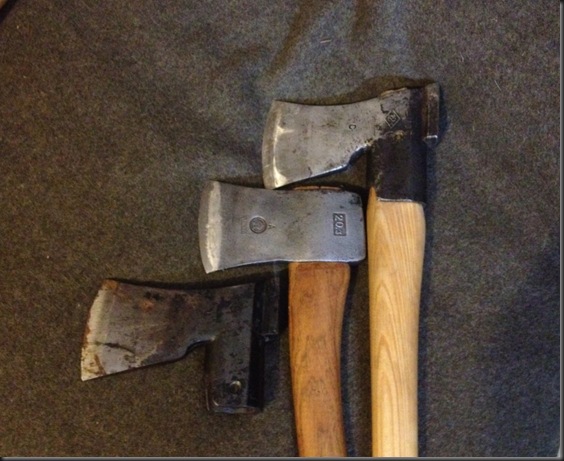 In the picture above, you can see 3 Kellokoski axes. All of them are similar in size as about 1.5kg. On the Kellokoski catalog of year 1922, N:o12.2 and N:o12.3 are listed as N:o12/2 and N:o12/3. According to my source, after the changes of lineups due to the production decrease, the numbering system has changed from using “/” to “.”. The model N:o20.3 is not listed on the catalog, so assuming that is a model came after the model lineup changes.

Among these axes, the model N:o20.3 has totally different shape from lest of axes. Because this axe is not a Finnish type. If look in to the catalog page 7, similar axes are categorized as an American axe.

The interesting thing about Kellokoski axes is that no punch out marking found on the axe. Only markings I can see are the forging marks.

I have visited town of Fiskars last summer and I was lucky to run in to the special exhibition of “tools”. It was exhibited by Fiskars and had items that were come from Fiskars production.

Among those items, there was a display of axe forging process. And the sample axes were from Kellokoski. 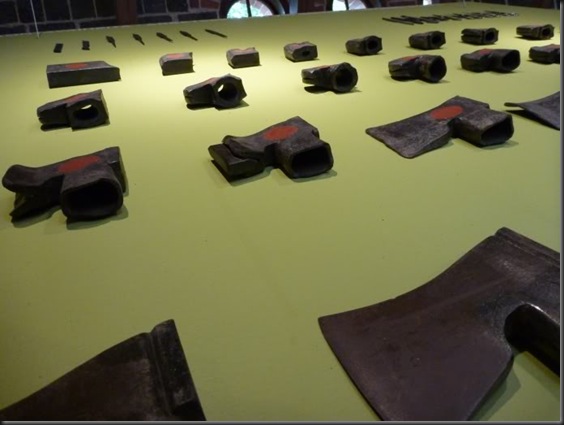 Unfortunately,  there was no mention of the Year made but being able to see such forging sample left for display and are in possession of Fiskarse, I am assuming that are from Fiskars era of Kellokoski.

Unable to see the punch cut markings on axes I own and those samples under Fiskars archive..., it is very much possible that Kellokoski has produced their axes by forging them till the end of factory history.

Not having mass production line till 1980’s… I find it quite amazing.

To be continued to the next post "Axe Talk - Helve".

Email ThisBlogThis!Share to TwitterShare to FacebookShare to Pinterest
Labels: Axes