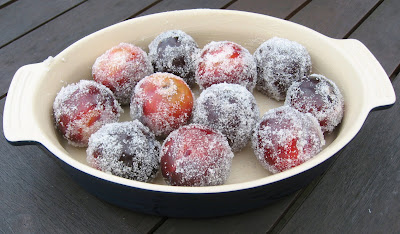 THE CLOSING DATE FOR THE KERRYMAID GARLIC BUTTER COMPETITION IN THE PREVIOUS POSTING IS 30TH SEPTEMBER, 2009 - THERE IS A WONDERFUL HAMPER FULL OF GOODIES TO BE WON!!

My husband has just bought himself a new toy - a Weber Spirit barbecue - he's even bought some of their accessories. It was pleasing to see him, instead of the usual suspect (me), buying utensils he didn't really need, but I have to say they do lure you into parting with your cash, they are sleek in design and also very practical.

The previous week he 'faffed' about with barbecue and kept asking for opinions and help on how he should go about cooking the food on his new barbie, it really is a learning curve with the Weber, as they recommend cooking with the hood down for some foods. 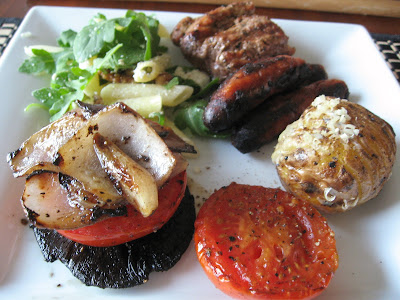 As you can see from the photograph - the barbecue was delicious!

I knew we would need a very easy and quick dessert to eat after the barbecue because I had to be prepared for the 'faffing' again! Idly flicking through the pages of the September issue of BBC Good Food Magazine I stumbled upon this glorious recipe for roasted plums. 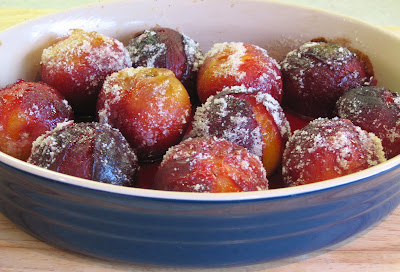 Roasting plums brings out the very best flavour and the wonder of this simple recipe was the vivid purple juices that oozed from the plums to make a delicious sauce. I allowed my plums to cool down for 10 minutes or so and served them simply with double cream poured over. Unfortunately, the photograph doesn't show the wonderful juices that came from the plums, perhaps due to more 'faffing'.

Pershore, Worcestershire celebrate the plum with a Plum Festival at the end of August. I've never managed to go, but perhaps one day we might make the trip. I would love to walk around the stalls overflowing with plums, buying them, and eating them straight from the paper bag - heaven!

1. Heat the oven to 200°C/180°C fan/gas 6.
2. Mix the sugar and cinnamon in a bowl. Whisk the egg white, then roll the plums first in egg white and then the cinnamon sugar until very well coated in a sugary crust.
3. Space apart in a buttered baking dish then bake for 15 minutes or until the plums are crusty, cooked through and starting to be juicy (I allowed mine to be quite juicy without the plums collapsing). To test poke in a cocktail stick, if it goes in easily, they are ready.
4. Serve with creme fraiche, ice cream or double cream.
Posted by bella at 10:06 AM