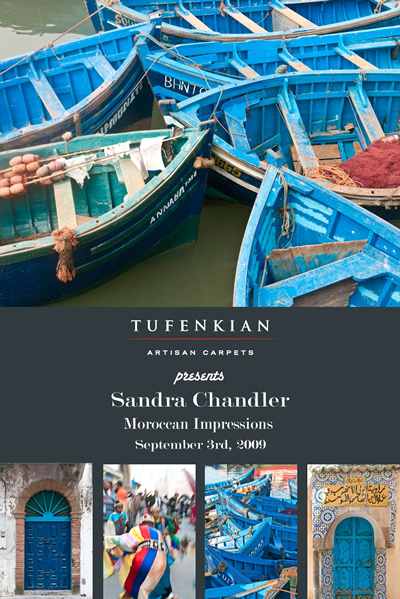 Following her return from our Gnawa Photo Expedition in late June, whose principal objective was to photograph the legendary Gnawa musicians during the 12th Essaouira Music Festival, Sandra immersed herself in working on her Moroccan Impressions, a collection of photographs that are to be shown at Tufenkian on September 3, 2009.

The venue's address is:

Sandra is a photographer and interior designer based in San Francisco. She tells us that color, smells and sounds drew her to world travel. Her city's Asian culture first enticed her to China in 1978 when the People’s Republic first opened. She then continued her exploration of Asia by traveling to Bhutan, India, Japan, Singapore, Nepal, Thailand, Tibet, and on to South America and Europe. Her website is here (LINK).

The Travel Photographer blog had a previous post on Sandra here. (LINK)
Posted by bella at 3:16 AM