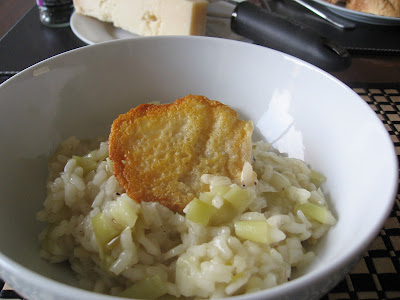 I could have told you I grew the leeks myself, I could have said I bought them from the Farmers Market, I could even have said, they were in my box scheme delivery. Alas, none of the above would have been true.

I know you are all going to be disappointed with me now, but they were out of a plastic see-through bag bought from the local supermarket. These leeks were left over from the Leek and Gruyere Quiche in my previous posting. I've let you down, I've let myself down and most of all I have let Nigel down - lets hope he will forgive a fellow West Midlander.

I preplanned the quiche and then forgot to buy the leeks and so had to settle for non-squeaky leeks. I could have made something else, but I had promised my husband I would make quiche, ran out of time and had to settle for the see-through bag!!!

If you can get crisp, bright, fresh leeks, then this simple recipe will taste even better, because it totally relies on the quality of the ingredients, that said, my risotto didn't disappoint but would have been even better, if only I had bought wonderful leeks....................'nough said about those leeks now.

The Parmesan crisps were tablespoons of grated Parmesan placed in a non stick pan and cooked until crisp. They were very moreish and one each just isn't enough - I would definitely make more.

The recipe is from Nigel Slaters new BBC programme Simple Suppers. It's great to have someone on TV who is giving the home cook simple, realistic, achievable and furthermore, delicious recipes. Nigel Slater never disappoints the home cook and he makes cooking stress free and enjoyable.

If you take a peek at his new cookery book you will find he grills some pancetta and adds this to the risotto at the end of the cooking time, but the above recipe is part of his DigIn series of programmes, which is obviously based on growing and eating your own veg! 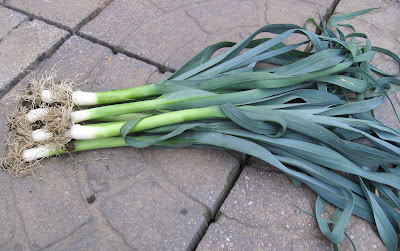 Yesterday I was fortunate enough to be given some homegrown leeks! I know that I have missed the moment with the above recipe but I think I have now redeemed myself to you all.............
Posted by bella at 10:34 AM