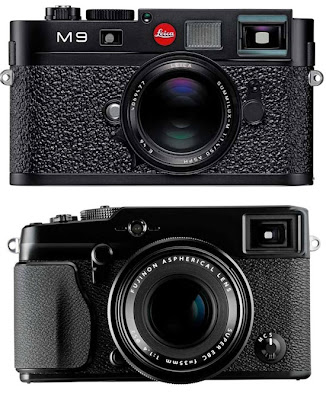 One of my most popular blog posts is the recent FujiFilm X-Pro1: Is It A Threat To Leica? in which I thought that it might well be, depending on the X-Pro 1's image quality (of course) and price point. It attracted a large number of emails...some agreeing with me, and others disagreeing.
About two weeks into the announcement, a large number of websites have expressed first look opinions and reviews of the X-Pro 1, and the consensus seems to be that Fujifilm is indeed putting the Leica M9 in its crosshairs with this new camera. Some even say that with the M9 based on the classic rangefinder model, the X-Pro 1 (although not a rangefinder as such) is the future...a reincarnation of that classic model. After all, it's an all-new camera system, with a brand new mount and lenses.

Another clue into Fujifilm's strategic thinking is its announcement it will make available a Leica M-mount adapter for the X-Pro 1, trying to peel off consumers away from the legendary classic but providing photographers the option to use the excellent Leica lenses as well as Voigtlander and Zeiss glass. How many times have I heard from established photographers that they'd love to have an M9, but it was too expensive? Lots.

Quite a broad range of lenses to suit every photography type! Wedding, street and documentary.

On the negative side, I also read in a number of hands-on reviews (of the pre-production models) that its auto-focus will not be as responsive as we'd like it to be. Another thing, the actual retail price has appeared in the UK, and seems to be £1350 (the equivalent of about $2000 including VAT of 20%, or $1600 net pre tax).

Will this Fujifilm newcomer pressure Leica to come up with a mirrorless model of its own? Perhaps. We have all seen countless companies fall by the wayside because they couldn't (or wouldn't) grab the moment...because of managerial inertia, bad luck or arrogance...or all of those.

I am not "dissing" Leica by any means. I own one and I'm very pleased with it despite its shortcomings (and my own), but I have no second thoughts the X-Pro 1 will nibble into the rangefinder market. How much of a nibble remains to be seen.
Posted by bella at 2:10 AM