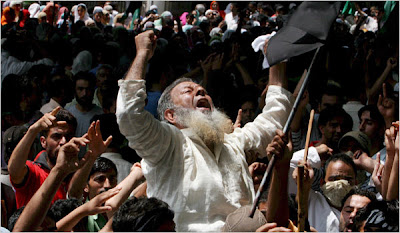 Farooq Khan/European Pressphoto Agency-All Rights Reserved
The New York Times features an article today on the current civil unrest in Kashmir, where it seems that the bitter dispute between India and Pakistan has reappeared. It all started with a dispute over a 99-acre piece of land, which has for more than two months been encouraged by both separatist leaders in Muslim-majority Kashmir and Hindu nationalists elsewhere in India.

It is sad that this festering wound has not healed. During the first few months of the year, tourists were flocking to Dal Lake in Kashmir. Eric Beecroft and I were so encouraged by the improving political and civil situation that we announced a wonderful Kashmir: Paradise On Earth Photo Workshop.

In late April, we decided to postpone it following explosions in Srinagar's main markets, and at the advice of our fixers and agents who believed the situation would get worse. Nevertheless, both Eric and I still hope that calm will prevail, and an accommodation will be sought and achieved between the two sides of the conflict allowing us to schedule the same workshop next year.
Posted by bella at 10:22 AM