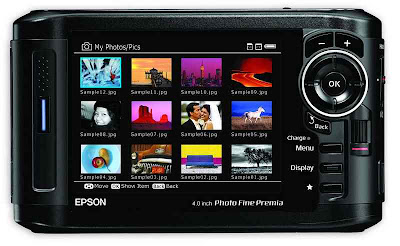 Epson announced two new generation multimedia photo viewers designed with photographers in mind. The P-6000 and the P-7000 offer photographers the opportunity to download and view their photos on a 4-inch, 640x480 (VGA) resolution LCD screen.

The hard drive capacities are 80GB (P-6000) and 160GB (P-7000), and both come with a 4-inch LCD with new, exclusive Epson Photo Fine Premia technology, which displays over 16.7 million colors, encompassing 94 percent of Adobe RGB color space for superior color accuracy. Epson claims that these new models have faster download speed , of up to 35 percent faster than previous ones. Also included is a zoom function for closer inspection of images, and RAW and JPEG file support.

I'm not yet sure whether these models' new improvements over my P-4000 warrant the price, but it's an item that I might eventually pencil in on my Santa's list.

David DuChemin on his Pixelated Image blog has just written about three backup harddrive/viewers which include the Epson P7000, and tells us that he chose the Hyperdrive Colorspace O.

My thanks to Bob Krist, the legendary travel photographer, who emailed me making the important point that the newer models of the Epsons have the ability to back up onto another USB device (like a small hard drive). However, a FAT 32 formatted USB harddrive, and a small AC Adapter for the hard drive, are needed. This setup could mitigate the need for a laptop.

Bob has also written an article on this very topic in Outdoor Photographer.
Posted by bella at 3:54 AM