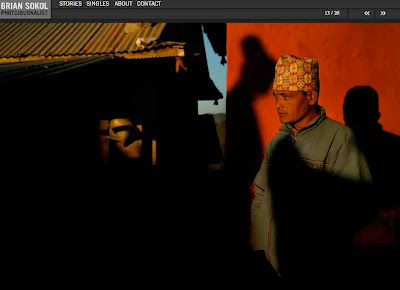 Photograph Brian Sokol-All Rights Reserved
Brian Sokol is a photojournalist who's documenting Asia for more than a decade. Based in New Delhi, he's a fluent Nepali speaker and has covered various conflicts in the Himalayan regions.

His photographs appear in publications such as The New York Times, Time, Stern, and Der Spiegel. He is the recipient of National Geographic Magazine’s 2007 Eddie Adams grant and was recognized as one of PDN’s 30 Emerging Photographers to Watch in 2008.

Apart from his photo essays, his website features his Singles portfolio, which I encourage you to visit. His portraits, some candids and others more like environmental portraits, have a photo journalistic "flavor" to them...the one above of Nepalis makes a lovely use of shadows.

Brian Sokol was also featured in Geoffrey Hiller's excellent blog: The New Breed of Documentary Photographers.
Posted by bella at 3:46 AM