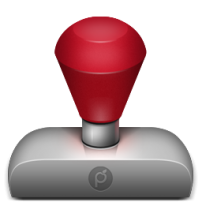 I seldom use Instagram but I really can't believe the amount of media attention that has been given to Instagram's recent amendment of its Terms of Service...CNN, MSNBC, CBS, NBC and ABC* all had the negative furore it created amongst its users. I initially thought the furious backlash was restricted to the social media, blogs and the rest of the Internet, but it spread all over.

The change in the terms of service was swiftly followed by an apologetic statement by one of the co-founders of Instagram which, in essence, is a waffle couched in legalese.

That said, let's wait and see what happens.

In the meantime, there's a solution for Instagram die-hards and those who don't want to cancel their accounts...as some professional photographers already did.

It's iWatermark**. It's an app available in iTunes, and costs $1.99. I've used on occasions, and it's pretty simple, versatile and would go a long way in preventing Instagram using one's images.

* I don't watch Fox.
** I have no relationship with iWatermark whatsoever, other than having used its said product.
Posted by bella at 5:56 AM