I mentioned in a previous post that I had decided to switch from my MSR Whisperlite white gas stove, to a canister stove. I’ll have more on my reasons for switching, and exactly what I was looking for in the next post, but here I want to briefly review the stove which I chose as the base for my canister stove experimentation, the Kovea Camp 5.

Kovea is a Korean company. The truth is that they actually make a lot of the stoves and parts for larger companies like MSR. Their stoves appear to have a good reputation. I first heard of them through Adventures in Stoving, a blog you should check out if you are looking for stove reviews or information. 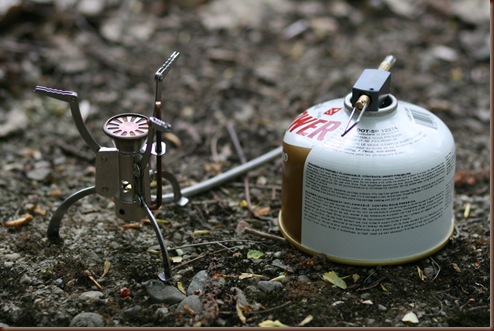 The Kovea Camp 5 is a remote canister stove. As the name indicates, the stove is not mounted on top of the canister, but rather attaches to it by a hose.

On my scale the stove weighed 5.3 oz. As far as I know, this is the most lightweight remote canister stove on the market today. Canister mounted stoves, which do not have legs or a hose, typically come in the 3 oz range. The next lightest remote canister stove that I know of is the MSR Windpro II at 6.6 oz. Aside from being so lightweight, the stove is also cheap. I got mine on ebay, new from the manufacturer for $50 (shipping included). This is comparable cost to canister mounted stoves, and is more than half the price of a MSR Windpro II.

The stove comes in a small box, inside of a plastic container. To be honest, I have not been able to get the stove back into the container once I removed it, despite the fact that there are instructions printed on it. The stove also comes with a remote igniter, which works well, even though I have no use for it as I always have a lighter in my pocket. 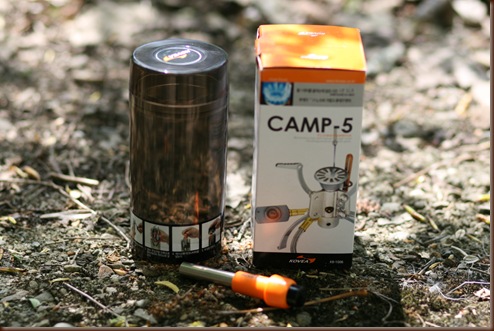 The stove itself folds up relatively small. The legs just get pushed next to the body. It makes for a narrow and somewhat long folded up stove. 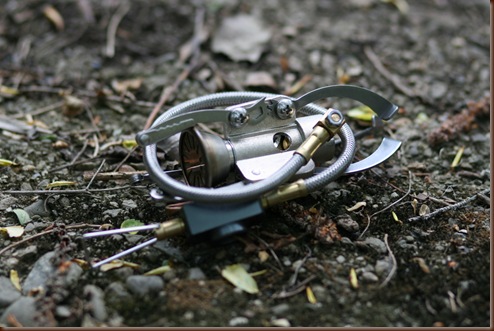 The Kovea Camp 5 has a preheating tube, which allows for inverted canister operation since the fuel passes through the tube which is heated by the flame before exiting through the jet. This is a big plus for stoves that have such a preheating tube, because it allows the stove to function in colder temperatures by using the fuel in liquid form. When operated with an inverted canister, the flame fluctuates a bit and requires some playing around to get it just right. 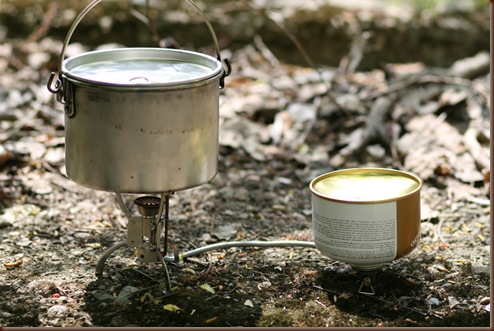 The stove has a narrow base, while being fairly high. Above you can see it with my Open Country 2Qt pot. The narrow base combined with the light weight of the stove makes for a very unstable platform. In fact, without a pot on top of it, trying to invert the canister is nearly impossible without tipping the stove. Even with a larger base, the stove would still be unstable, as the tension in the hose would cause it to move due to its light weight. Below you can see it next to my MSR Whisperlite. 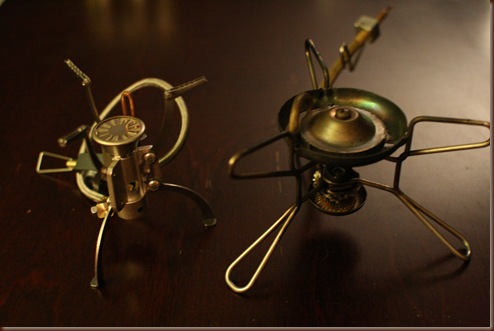 The Kovea is a little taller, and quite a bit narrower than the MSR.

The flame pattern is similar to what you would see on a MSR Pocket Rocket. It is very narrow and focused. When you turn it up, the Kovea more closely resembles a blow torch than a stove. When using it however, that did not create any problems. I was able to cook rice and beans without any issues or burning. 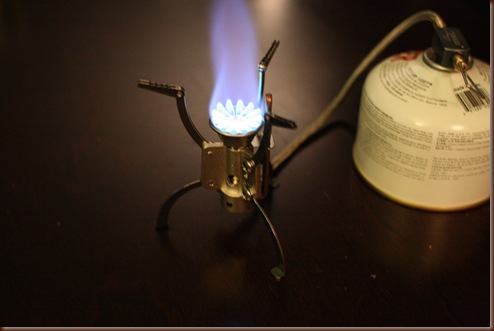 I never actually intended to use this stove as it is. It was always going to be a base for experimentation and modification for me. The low cost made it an easy choice. If you want to use it as is, here are some of the pros and cons as I see them:

I don’t have much experience with stoves, especially canister stoves, but overall, with the modifications that I have done to mine, I am very happy with this stove. It is hard to beat for the price. If however, you want a stove you can operate out of the box without any hassle, and money is not an issue, I would have probably gone for the MSR Windpro II. The extra weight is well worth the added stability.