In the last post I reviewed the Kovea Camp 5 stove. As I mentioned there, I got it with the intention of experimenting and modifying it. I don’t have much experience with canister stoves, so I figured I would get a cheap one to play around with. 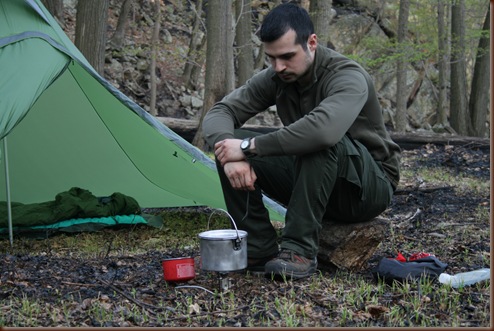 First, some background. For many years now, I have been using the MSR Whisperlite International stove. From time to time I have also played around with alcohol stoves, but they never felt right to me. After so many year of use, I feel completely comfortable with my MSR Whisperlite. I have no problem simmering with it, or lighting it inside my tent. It’s only downside is that it is relatively heavy. The stove itself is about 12 oz, and together with all the rest of the required equipment, you end up carrying more than a pound of weight.

The easiest way to cut weight is to switch to a canister stove. A stove like the MSR Pocket Rocket or the Snow Peak Giga Power 100 weigh only 3 oz. There are some that are even lighter.

My problem with those stoves is that while light weight, they do not operate well at low temperatures. In my area, I camp down to 0F (-18C), and I wanted a stove that can function at that temperature. I don’t like having one stove for warm weather and another for cold.

A canister mounted stove (one that screws on top of the canister, like the MSR Pocket Rocket) depends on the gas pressure in the canister to force the fuel out. Unfortunately, even with the best cold weather mixes (isobutene/propane), the fuel stops vaporizing at about 20F. That means that the stove will not work below that temperature.

Some canister stoves solve that problem by allowing the canister to be inverted, and using the fuel in its liquid form. This way the stoves can function down to about 0F or even lower. This is done by having a free standing stove that connects to the canister with a hose. These stoves also have a preheating tube, which passes through the flame, vaporizing the liquid fuel before it reaches the jet. In effect, these are white gas stoves that instead of using a pump to pressurize the fuel bottle, they use the small amount of pressure in the canister to push it to the stove. Correspondingly however, these stoves weigh more. In many cases, you are just saving the weight of the fuel pump. For example, the MSR Whindpro canister stove is virtually identical to the MSR Simmerlite white gas stove.

So, I was looking for a remote canister stove that would allow inverted canister operation, which was light enough to be worth the switch from my trusty MSR Whisperlite.

I settled on the Kovea Camp 5 stove. The main reasons were that it was cheap, so I wouldn’t feel bad messing with it, and it is the lightest remote canister stove on the market. I figured it would be a good base for modification.

After using the stove, my main goal was to modify the legs. I wasn’t so much worried about weight savings, but wanted to improve the stability. Here is what I came up with: 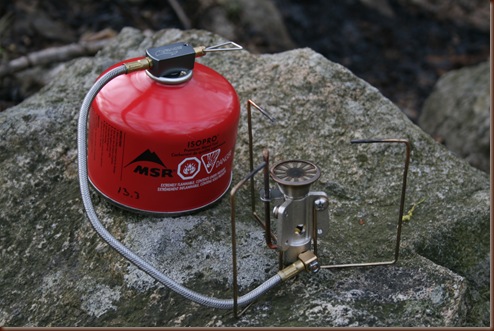 I started out by removing the legs of the stove. This was easy to do, as they are simply held on by screws; one for each top leg and one for each bottom leg. 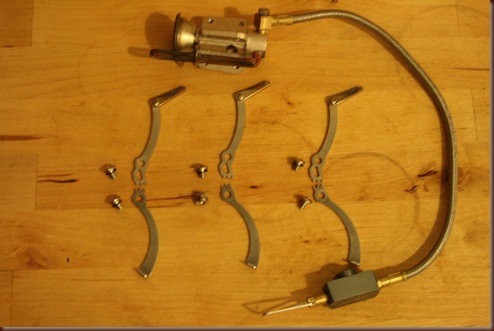 I then used a pair of pliers to shape some Staples Jumbo paperclips into the desired leg shape. I made the legs so that when installed, the stove exactly fit inside my Open Country 2Qt pot. 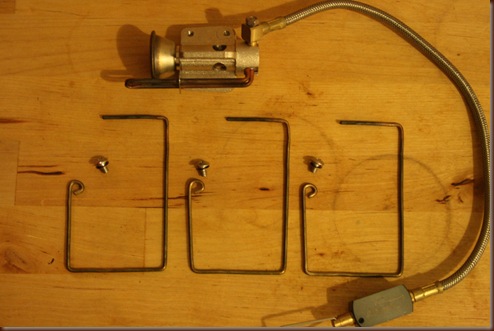 On one of the ends of each leg, a twisted a loop where a bolt could be threaded. Each leg then screws into the corresponding hole where the top part of each leg was screwed in on the original stove. 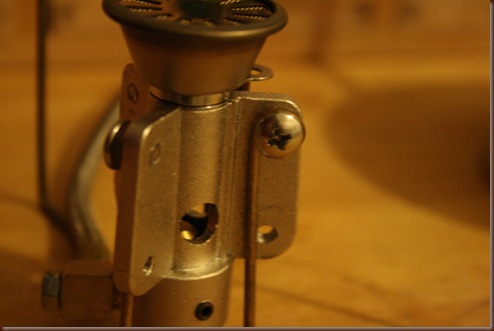 And that’s all there is to it. The legs do not fold. That is why I had to make sure they fit inside my pot. On the up side, the stove is much more stable, and I reduced the weight of the stove to 5.0 oz. Ooooh, I know, weight savings of 0.3 oz. Because it is so light, the stove can still be easily tipped over, but is significantly more stable than it was before. So far I have been very happy with the modification. The legs are strong enough to support a fully filled 2Qt pot. Because they are made of thin metal, there is some flex in them, but they always return to the original position without the stove tipping over. A thicker metal will reduce the flex. 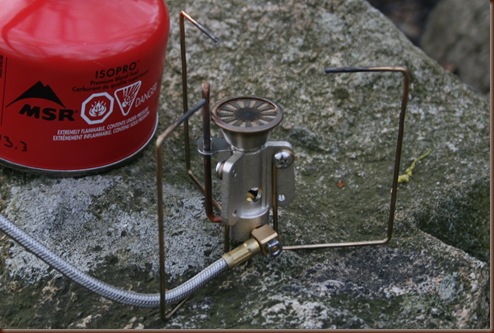 You can get more significant weight savings by cutting off some of the metal where the old legs used to be attached. As you can see from the above pictures, all you need is the area where the top bolt attaches. Everything underneath, which is quite a bit of metal can be removed. I may very well end up doing that.

Looking at this stove, which now sits at exactly 5 oz, I am surprised manufacturers have not put out more lightweight remote canister stoves. Even this one can easily be lightened by a lot. I don’t see a reason why MSR or Primus can’t put out a 3 oz remote canister stove. I’m sure there is a market for it.