The Guardian newspaper in London alerted me of an exhibition opening next week of John Kenny's new portraits from Kenya.

John Kenny started a journey in 2006 that took him though many of Sub-Saharan Africa’s remotest communities. He spent hours walking, hitch-hiking and driving across African countries making photographs of people, ancient cultures and traditions.

The Guardian and the exhibition venue (3 Bedfordbury Gallery) has a selected number of these portraits, but the collection can be best seen on John Kenny's website.

He tells us that the images were taken during his second trip to the far North of Kenya in 2011. With major drought across the Samburu, Rendille and Turkana villages in the region, he wanted to to convey a little more on how climate changes are undermining traditional pastoral ways of live in East Africa.

I have featured John Kenny's work a number of times. You can the posts see here and here.

Should I go and see the exhibit at the Covent Garden gallery whilst I'm in London, I'll post my impressions.

I just noticed that John Kenny used a 10x8 format Chamonix camera for some of his work. 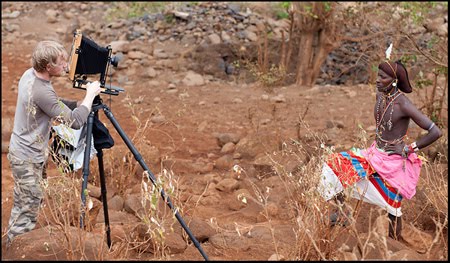