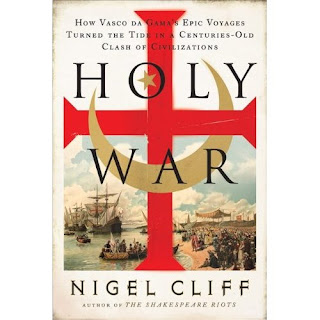 This is the kind of book that makes my pulse quicken.  It's about the Portuguese navigator Vasco da Gama who sailed from Lisbon in 1497 to lead an expedition to find a new route to India. I haven't read it yet, but will certainly do so before I set for my own expedition The Oracles of Kerala Photo Expedition/Workshop™ scheduled for March 2012.

There's a review of the book on The New York Times' Sunday Book Review, from which I quote this (and you'll understand why my pulse quickened):

As Cliff recounts, the “landing party had assumed that Hindu temples were Christian churches, they had misconstrued the Brahmins’ invocation of a local deity as veneration of the Virgin Mary and they had decided the Hindu figures on the temple walls were outlandish Christian saints.” True, “the temples were also crammed with animal gods and sacred phalluses,” but these surely reflected exotic local Christian practices. What mattered to the Portuguese was that these long-lost Indian Christians permitted images in their “churches.” Thus, whatever their idiosyncrasies, they could not be Muslims. The Portuguese joined in the chants and invocations with gusto. When the Hindu priests chanted “Krishna,” the Portuguese heard it as “Christ.”

As one of the underlying objectives of The Oracles of Kerala Photo Expedition/Workshop™, like some of my previous photo expeditions in India, is the visual documentation of its syncretic religious traditions, the publication of this book seems have been timed perfectly.