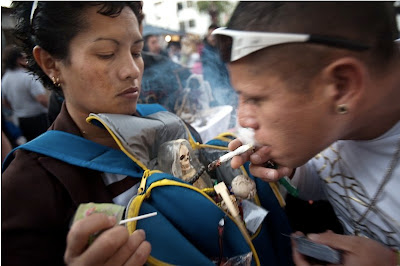 Photo © Trevor Snapp-All Rights Reserved
Trevor Snapp is a self-taught photographer with degrees in anthropology and African studies, and his work is syndicated with Corbis and Millennium Images. His clients include Stern, National Geographic Traveler, BBC, Time.com, Chicago Tribune, Marie Calire and others. He has also worked for a variety of NGOs such as Heifer International, Gates Foundation, and Intrahealth in Africa.

Now based in Kampala, Trevor photographed La Santa Muerte in Mexico, among other galleries of Central Amercia

The cult of Santa Muerte is unusual because it's the cult of the drug lords, the dispossessed, and criminals. There are many shrines to Santa Muerte in the capital city, but Tepito is where the most popular shrines are. Tepito is an infamous barrio and its tough reputation dates back to pre-Hispanic times. The neighborhood is a warren of mean streets and alleys, lined with auto-body shops and small stores. It's here that the prostitutes, drug dealers and petty thieves come to pay their respect to the saint. It's also where the common folk; housewives, cab drivers and street vendors come to make their offerings...tequila bottles, candles, money and flowers.

The gallery strikes a chord with me since I photographed in Tepito in 2008, along with two other photographers, when we were within a hair's breadth of being mugged.
Posted by bella at 2:14 AM