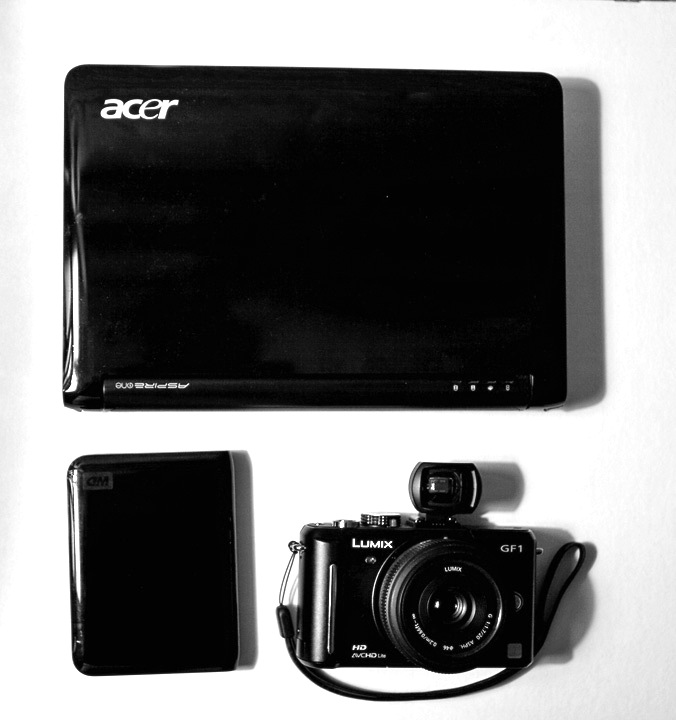 Yes, I caved and got an Voigtlander 40mm optical viewfinder for my Panasonic GF1. It's well suited to the Panasonic 20mm 1.7 lens.

But this is not about the viewfinder or how much better the GF1 feels with it...it's about the above 'minimalist' gear which is an option when I'm planning an assignment or a photo trip. I can have all this in a small Domke bag, and have spare room for a book, an audio recorder, an itouch and lots more.

Imagine the bliss of having all one's gear in a small and light bag!!!

Am I contemplating chucking out the DSLRs and lenses? Not at all. What I now have available to me is equipment which, depending on the nature and duration of the trip and/or assignment, is a viable alternative.

The easy one first: the WD Passport 750gb is small and worked well so far. It may not be as tough as a Lacie Rugged, but it's functional, provides ample storage and is inexpensive.

The not-so-easy: I've used the Acer netbook on 3 or more photo expeditions, and it also did okay. However, its Windows XP software is a major irritant, and its Atom processor is really sluggish. I seldom have it process any image files, and just use it to save my RAW files on its 160gb hard drive and on the WD Passport. An eventual alternative to the Acer could be an iPad, if and when it allows connectivity to an external HD.

Another not-so-easy: The GF1 is a delight to use, and the quality of its images is almost as good as from an entry-level DSLR....but almost is the key word. Having said that, it's still a lovely tool to use on walk-abouts, for environmental portraits and as a back-up. It'll be very useful in situations where photography may be frowned upon (like religious rituals) or where one doesn't want to be labeled as a professional photographer.

I'll be taking the GF1 (along with my Canon gear) to Istanbul in a couple of weeks, and will further test its walk-"aboutability".
Posted by bella at 2:11 AM