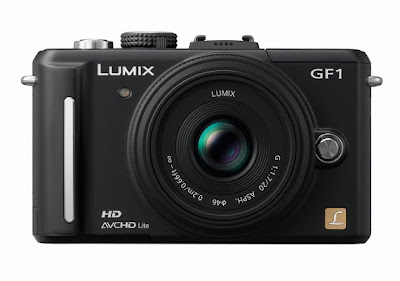 Having lost patience with Amazon's delivery system, and the fact that its delivery was now estimated to be between June 1 and June 14, I called yesterday and canceled my order. The customer service lady was extremely pleasant and nice, making me feel somewhat guilty for a while.

My guilt didn't last too long after I saw that Adorama had a Panasonic GF1 with a 20mm/F1.7 for $847 excluding NYC tax, but including some stuff like an 8 GB SD Sandisk memory card, a Lowepro carrying case (I much prefer my own pouches), a wonderful USB 2.0 SD card reader (like a memory stick), and a cleaning kit (of dubious use except for a nice lens brush).

I walked over to the store, got served by a lovely young woman (inexplicably wearing a scarf in NYC's heat) and had my new camera and accessories in under 10 minutes.

As with every camera and electronic gadgets I buy, I tried to work through the controls and settings without opening the manual. I got reasonably far, and was stumped a number of times, especially as I am used to a Canon "nomenclature". So I'll have to spend some time studying the manual after all.

I will soon test the GF1 and will post some of the street shots here. However, my first impressions holding it, shooting a few interior shots and so forth, gave me a sense that it's a solidly-built small camera. Not a point & shoot, not a rangefinder...but a hybrid in between the two.
Posted by bella at 2:49 AM