This past weekend some of the guys from Blades and Bushcraft and I decided to get together for a trip. After some cancelations, by Saturday morning, the ones who were still ready for the trip were me, Rich, and George.

The plan was to catch a trail into the Slide Mountain Wilderness for a few miles, until we reached the Neversink river. From there we would bushwhack along the river until its end, at which point we would climb up to a col between Balsam Cap and Rocky Mountain. I have been in this area before on few trips, and knew that the bushwhacking along the river was manageable. 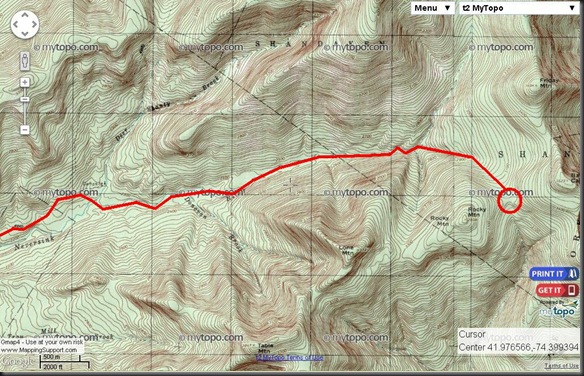 We started out Saturday morning. There were several small bridges we had to cross along the trail before we reached the main branch of the Neversink river. Unfortunately, at that point my camera broke (apparently a factory defect), so the rest of the pictures you see here were taken with my phone and with George’s camera. Sorry for the poor quality. 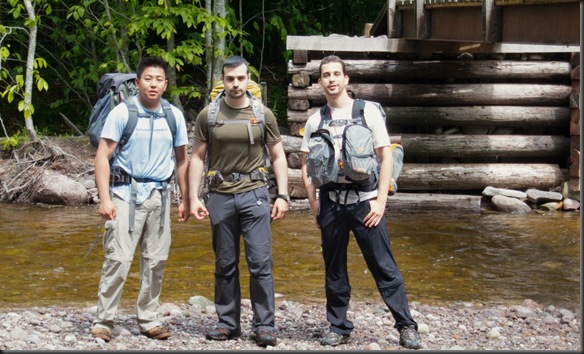 The previous night we had had a huge thunderstorm that lasted till the morning. Luckily it stopped by the time we got to the forest, but the rain had caused the water levels of the river to rise, and had washed away sections of the bank. 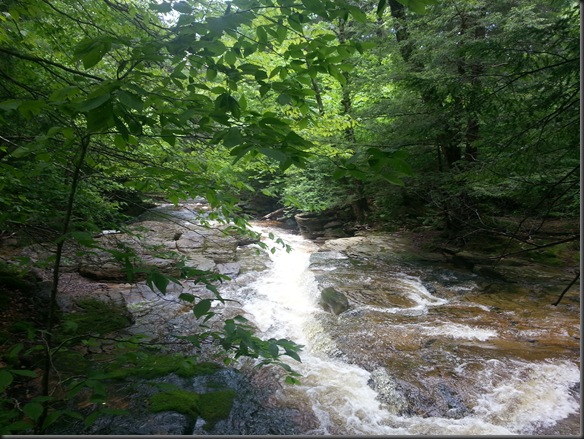 This forced us to follow some less than ideal routes along the river. For example, here is a patch of stinging nettles that we had to make our way through. 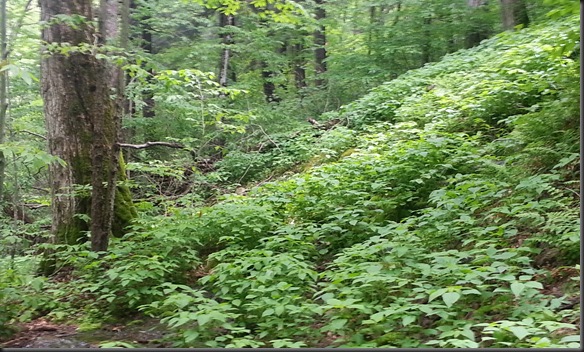 George had a geocaching app on his phone, so we were actually able to find one of the caches along the river. 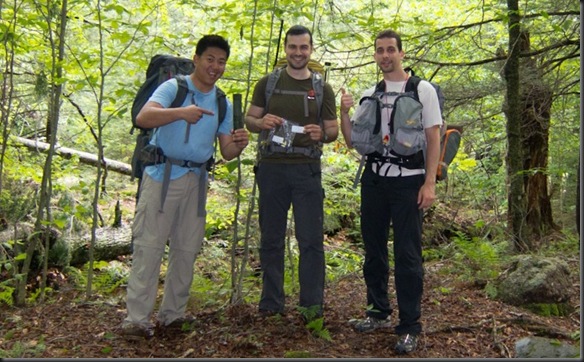 We also got a picture of this. I have no idea what it is. 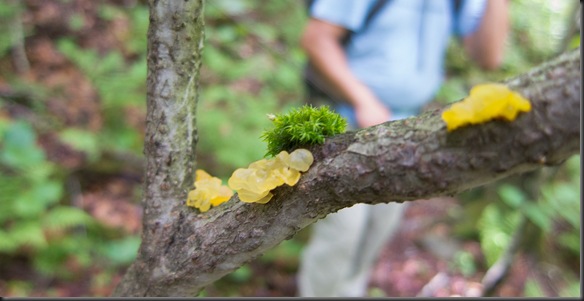 The river was also generating some very thick foam in several places. I’m not sure why. 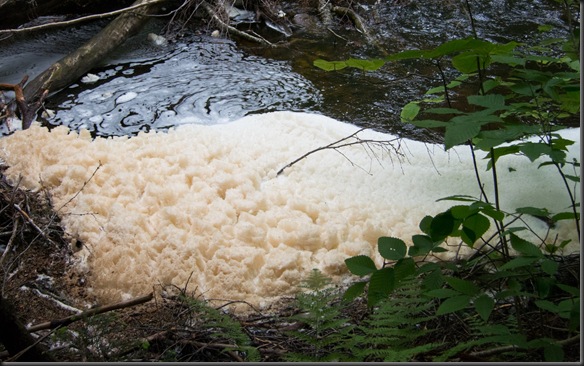 In places the forest would open up, and allow for easier trekking. We had intended to do some fishing along the way, so Rich took the opportunity and gave it a try; unfortunately without success. 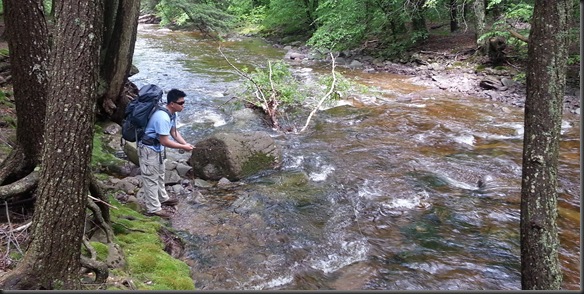 We continued along the river for several more miles until we reached the top third of the river. At that point we were forced to make a crossing in order to avoid a set of cliffs that was blocking our path. The elevated water level made it difficult, and the freezing water didn’t help. Usually by this point the river is shallow enough to cross by doing some rock hopping, but not this time. 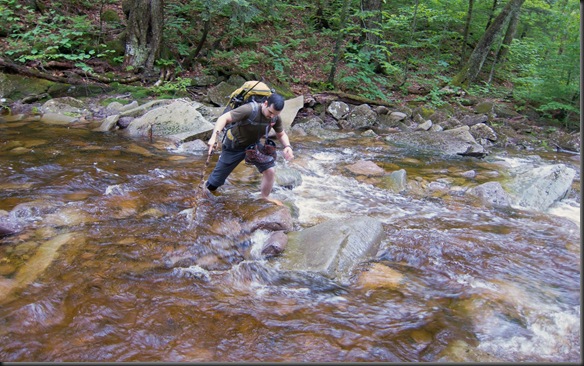 After bushwhacking for another mile or so on the other side of the river, we once again had to cross it in order to make our final approach towards the col. We followed along one of the tributaries up towards the col. After what felt like an hour of climbing, we got collectively lazy, and decided that it would be a much better idea to stop about 200 ft below the col and set up camp for the night. 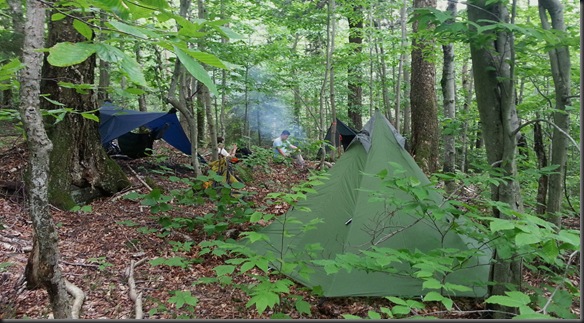 We filled up with water from a nearby stream, cooked dinner, and occupied our time with concentrated efforts on keeping the fire going despite the soaked wood. 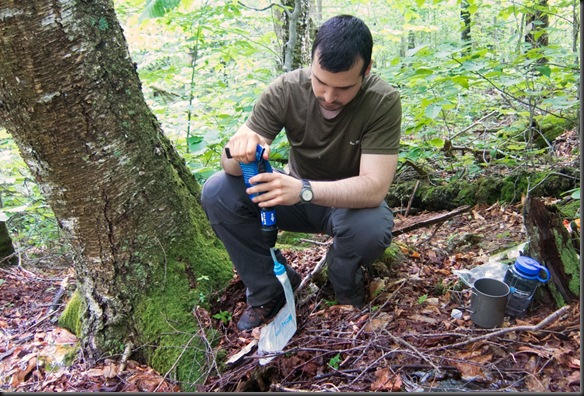 We spotted several interesting wildlife facts in the area. Here is a spider with its fangs in an insect: 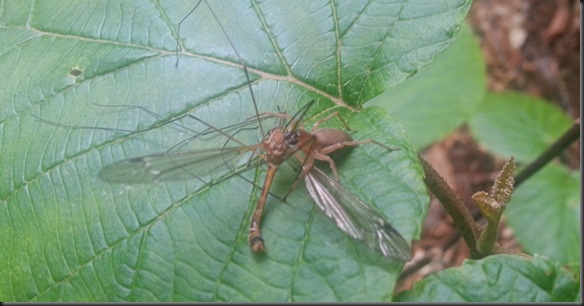 Here is a moth waiting for the sun to go down: 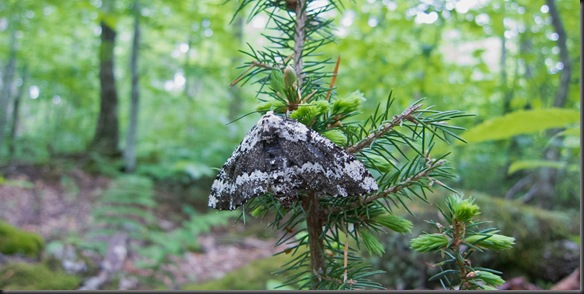 And… here is a fresh pile of bear scat about ten feet from where we had set up camp. There is a lot of bear in this area, but it always makes you think twice when you find scat that close to where you have set up camp. 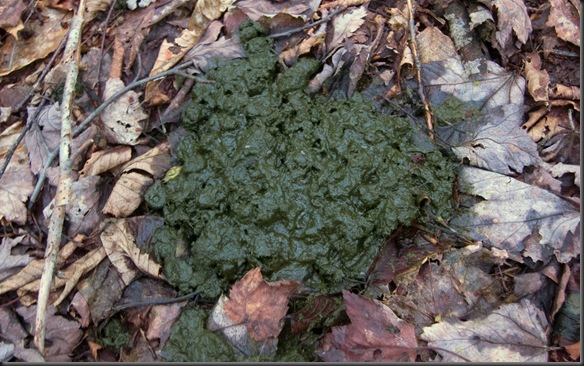 Anyway, not much we could do at this point. Camp was set, and the fire was going. 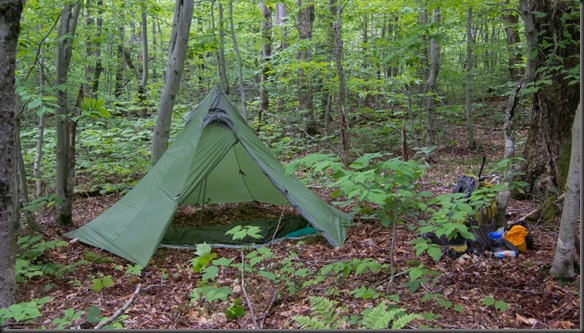 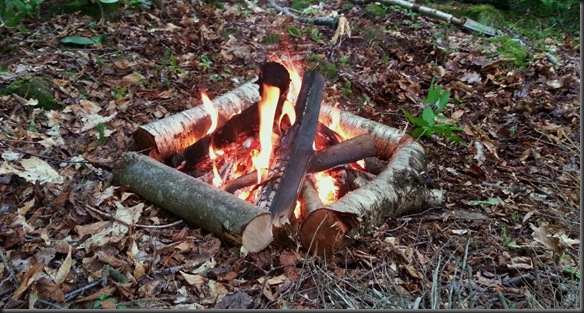 The night was uneventful. We had no problems with the bear, although the mosquitoes were a big problem for me.

In the morning we ate breakfast, packed up, and got going. We still had to make two river crossings in order to get back, but we decided to make the first crossing higher up the river to make it easier. Rich and George, possibly inspired by a Bear Grylls marathon, made their way over a log, while I hopped over some rocks further up the river. 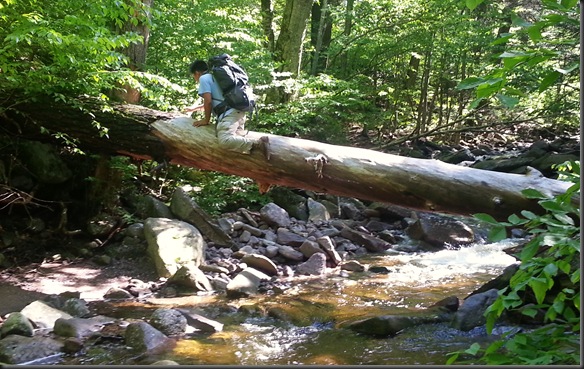 The second crossing was also easier. The water levels had gone down, so we were able to cross without taking our shoes off. 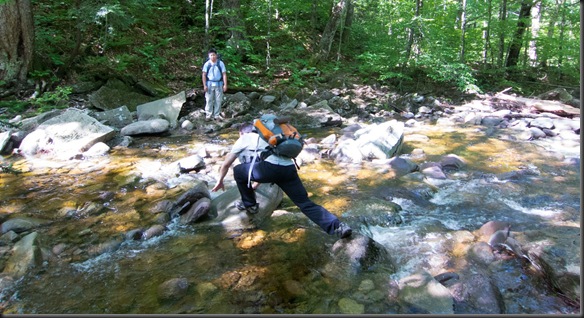 A salamander was trying to warm up on one of the rocks right where we were crossing, and seemed unimpressed by our acrobatics. 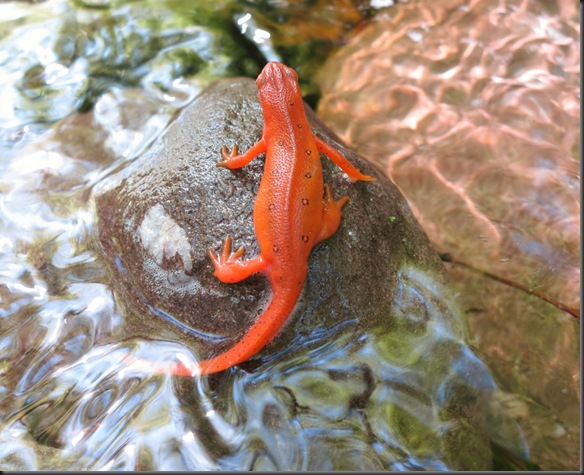 Further down the river we tried our luck at some fishing again. 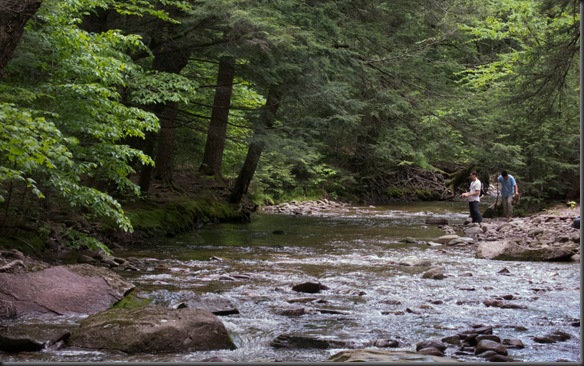 Rich and George were fly fishing, so I moved further down the river with my spinning rod. 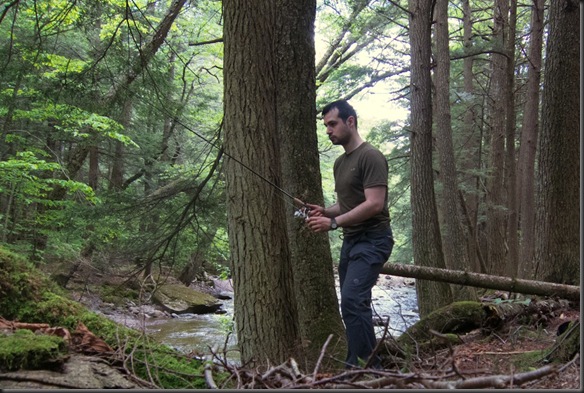 None of us had any luck. All of us coming up short in the fishing department, lunch was limited to the food we had brought. 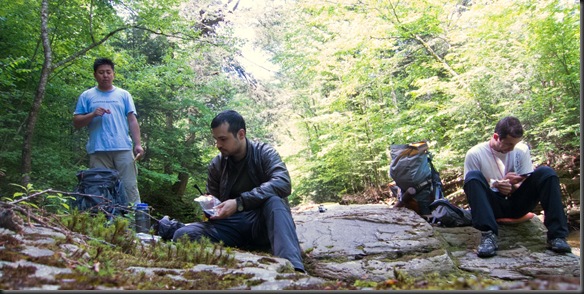 By this point the going was getting easier. A few more miles and we were back on the trail, and over the bridges. 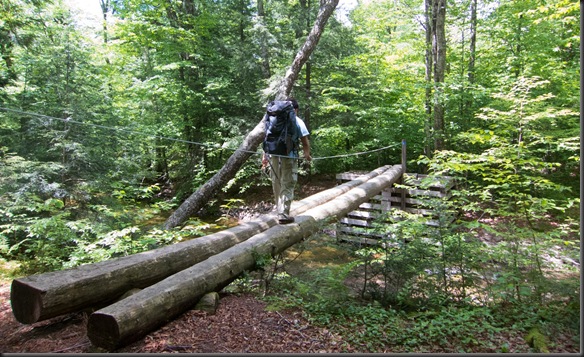 Once on the trail it was smooth sailing out of the forest, even though we were all very tired. Here is what the trip looked like on the GPS. The round trip was ten miles overall, and we averaged about a mile per hour over this terrain, which is to be expected for easy bushwhacking. We slowed down significantly on our approach to the col. In addition to the harder terrain there, we made the mistake of actually following the tributary up the mountain. We would have had better luck had we tried the area a bit further from the water, as the terrain there was much easier to traverse. 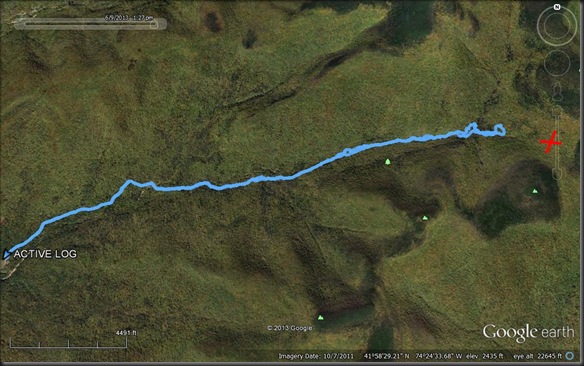 The blue line above is a recording of our actual path, while the red X is the location of our intended destination. I can’t say I am too upset. I had been through that area when I was bushwhacking from Balsam Cap to Rocky mountain, and I wanted to examine the col in more detail for possible hunting in the fall and winter, but I was too tired to keep climbing. Setting up camp was the right thing to do on this particular trip. I had great company, and it was a fun trip despite all of the mosquito bites.