Oh, and You Thought It Was Over! Dual Survival “Resume Embellishment” Continues

Just when you thought that the Dave Canterbury fiasco had taught the Discovery Channel a lesson in doing proper research on their TV hosts, new allegations have surfaced that Dave’s replacement, Joe Teti has also embellished his resume with respect to his military career. 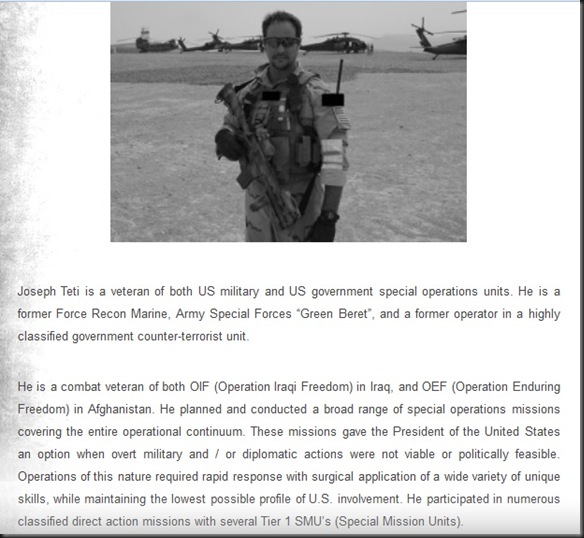 The allegations arose from several blogs which focus on issues of false claims to military service and recognitions. A fellow blogger over at Rocky Mountain Buschraft had put up a good summary of the facts, which is where I first learned about this, but appears to have taken it down since then. The post is now back up. Apparently it was down due to a technical error, and you can see it here.

The gist of it, from what I understand, is that he claimed to be a veteran of the Afghanistan and Iraq wars, when in fact he was a private contractor there. The part that has gotten everyone talking is that his resume states that he is a “combat veteran of both OIF (Operation Iraqi Freedom) in Iraq, and OEF (Operation Enduring Freedom) in Afghanistan”. Those who have taken offense argue that he was not a United States soldier in those wars, and as such can not claim the title “veteran”. He was present during both wars, but as a private contractor.

Seems like a much lesser embellishment than the one by Dave Canterbury, but it still has gotten people upset. If you want to sift through all of the information, you can check out Stolen Valor Offenders Exposed, and This Ain’t Hell But You Can See it From Here.