The Incomplete Woodsman - Skills We Lose Because of Our Close Mindedness

Before I begin this latest rant, I want to be clear that here I am going to focus on those of us who select skill sets and equipment that we think will make us better woodsmen. I will not be talking about historical researchers and recreationists. That is an academic and worthwhile pursuit based in research, nor would I be speaking about gear and skill selection that is honestly based on reasons other than practicality or direct furtherance of woodsmanship. This is also not meant to be a direct response to anyone else’s post either. As luck would have it, a few fellow bloggers have recently posted on similar subjects. I started writing this one a week or so ago, so its intent was not to address any of their posts directly.

Long time ago, when I first started going into the woods here in the US, I noticed, just as have many others that a large portion of backpackers lack some basic wilderness skills. It was shocking to me that people would go into the woods but know almost nothing about making fire, selecting a shelter site, tree identification, etc. So, I quickly steered towards what has come to be known as the bushcraft community, a group of people who were more interested in preserving the skills used by outdoorsman throughout history.

As time passed however, I started noticing a peculiar trend with some members of that community. The problem as I see it is one of selective historical memory of outdoor/woodsman skills. It is as if though people pick a particular time period in history and proceed to learn all of the skills utilized through the time. That is all well and good, but for some reason they would then refuse to learn any skills that were developed by woodsmen after their chosen historical period, or use any technology that post dates it, with the exception of technology that mimicked the look of the old ways (ferro rods, parachord, etc).

It is as if though for some people history is divided into two periods: the time when there was valuable knowledge of wilderness skills, and the time where there was none. Different people would draw the line at different places, but for most it seems to be the late 19th/early 20th century, focused around Nessmuk and Kephart. As a result, people would work very hard to preserve the skills known and used during that time period (an admirable pursuit), but then strangely they would refuse to accept or even acknowledge the possibility that there was any further development in woodsmanship after that period, and no knowledge or development that occurred after that period is worth learning or using. 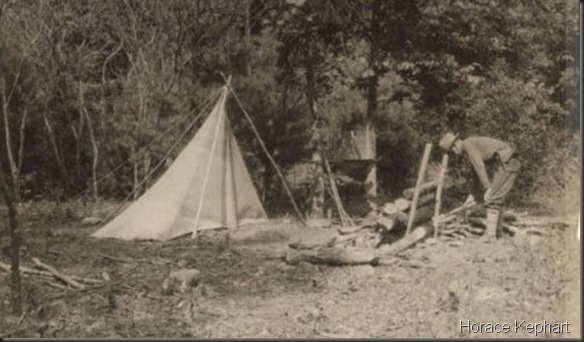 I am very perplexed by what I see as this artificial dichotomy. As far as I can tell, development of woodsmanship, wilderness skills, and bushcraft occur on a continuum. Each generation of woodsmen (recreational or professional) that goes into the woods learns from those before them and then elaborates on those skills and improves on them based on what is learnt over the years. We seem to forget that while Nessmuk and Kephart were passing down traditional knowledge, at the same time they were innovators both when it came to skills and equipment, and they quite often departed from the “old timers” in their recommendations.

In my opinion it is foolish and disrespectful to many woodsman to assume that everything worth knowing about being in the woods ended in 1920. Not only is it strange from a theoretical standpoint, but in my opinion it leads to poor woodsmanship and is as regrettable as the lack of knowledge of those backpackers who can not start a fire or use a compass. Each group has neglected valuable knowledge about living in the woods; but just done it by ignoring the knowledge of different time periods.

It is certainly understandable how one can reach the conclusion that after a certain point in history knowledge of woodsmanship was lost. If we look at current backpackers very superficially, we may be justified in saying that they know very little about life in the woods, and that as a result we should look at woodsmen from the past for guidance. If we however look more closely, we will see that this couldn’t be further from the truth. It is true that many backpackers lack basic knowledge of the woods, but that has always been true of the recreational outdoorsman. In fact, both Nessmuk and Kephart write about those people during their time, and the same is true if we look even further back. Wilderness guides and experts were always in need to lead other less knowledgeable people through the wilderness, and dime store novels about their exploits were always fast sellers.

The same is true today. Yes, the average person who car camps on weekends may lack knowledge of the woods, but there are many others, and have been continuously through our history, who perform great exploits in the wilderness. In 2010 Andrew Skurka completed a six month, 4679 mile circumnavigation of Alaska on foot and with pack raft, navigating with a map and compass. In 1986 Reinhold Messner became the first person to climb all 14 26,247 ft (8,000 m) peaks without supplemental oxygen. In 1992 Sir Ranulph Fiennes and Dr. Mike Stroud became the first people to cross Antarctica unsupported. In 1995 Richard Weber and Mikhail Malakhov became the first to reach the north pole and return under human power unsupported. In 2010 Ed Stafford became the first person to travel the length of the Amazon. The journey took him two years. And these are only few of the many examples out there. 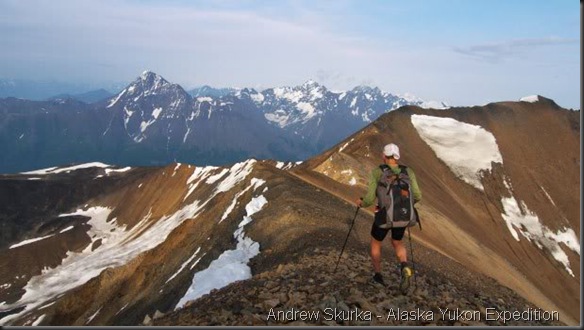 Are we to look at all of those woodsmen and skilled outdoorsmen and tell them that their knowledge and skills are not worth learning? That the height of woodsmanship was achieved in the 1920s, so the developments they contributed and the skills they pioneered should be ignored and marginalized? Is the gear they used and developed for their journeys somehow less “outdoorsy” than that developed by someone in the 1900s? 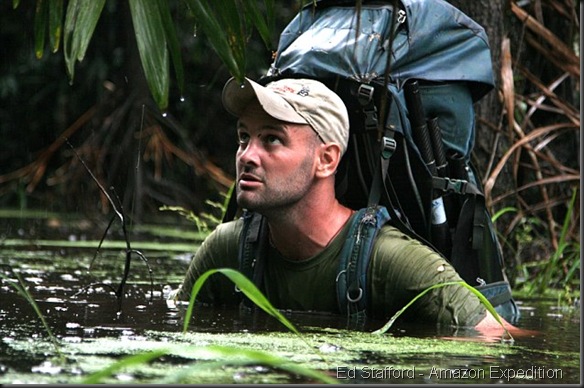 Some proponents of woodcraft or bushcraft appear to see everything as a struggle between woodsmanship and modern backpacking. For them somehow they are mutually exclusive, and the later is to be looked down upon. Perhaps this mentality is understandable. It is in large part reactionary to the regulations of the 1970s where in order to curb the tide of irresponsible outdoorsmen, there was a large push to use modern equipment rather than natural resources. Now the pendulum seems to have swung in the opposite direction, degrading anything that was a product of the second part of the 20th century and forward. While understandable, I believe that mentality to be overly simplistic and driven by emotion rather than practicality. Unfortunately the result is loss of valuable wilderness skills and abilities.

Woodcraft, woodsmanship, bushcraft, or whatever else we want to call it progresses through time. A smart woodsman learns from the experience and knowledge of those who preceded him, and then continues to innovate and develop. He takes technology that works and adopts it so that his ability to travel through the woods can be furthered and achieving his goals can be made possible. Ignoring the past, whether it be the distant past or the more recent past is a foolhardy approach that I find disrespectful to all those woodmen that have risked their lives, and in many cases have lost them in furtherance of those skills, knowledge, technology and equipment.

The luxury of rejecting more modern and practical gear and techniques is only something we possess because we do not actually rely on any of the woodcraft that we so loudly preach. It is only when your trip is restricted to the backyard that we can talk in grandiose terms about the spiritual value of woodcraft and the evils of modern technology. We then take this emotional drive, combine it with a dose of nostalgia, and we force upon the outdoor community this artificial dichotomy of woodcraft vs. modern camping; a dichotomy that is neither true nor necessary. No actual woodsman throughout history has had the luxury to do so because their lives have been too focused on practical pursuits.

Of course any of us who are more familiar with the woods can go out there in moderate temperature, spend half the day collecting firewood and then sit by the fire wrapped in a wool blanket. Does that make for a better woodsman? In my opinion it does not. In one stroke of the brush, this person has now limited his abilities as a woodsman. Instead of being able to travel further, climb higher, hunt more game, gather more resources, and explore a greater part of the forest, he has locked himself down because of poor gear selection in a way that completely ignores the spirit of those woodsmen from centuries past who went into the woods with practical pursuits in mind, to explore, to hunt, to pioneer. Furthermore, this person is now limited in the type of weather in which he can go out. A blanket and fire is fine in mild temperatures, but when the mercury drops, the result is that this person ends up staying home because as our predecessors such as Kephart and E.H. Kreps noted, wool blankets are inadequate for winter travel. A better woodsman? Why is the ideal being able to go into the woods with a blanket roll, a tomahawk and a knife? How does limiting what we can do, where we can go, what we can hunt, how far we can travel, and even the time of year in which we can go out make us better woodsmen? In my opinion it does not, and the approach would make people like Nessmuk, Kephart, and the woodsmen that preceded them look at us like we have lost our minds. Any goal we wish to pursue, whether it be minimalist gear, weigh reduction, long distance travel, hunting, fishing, etc, can be furthered by and accomplished within a more inclusive view of skills and gear that is not limited by any specific time period or trend.

Because of what I perceive as our close mindedness, we continue to lose valuable woodsmanship skills. A backpacker who ignores the techniques used by woodsmen in the first half of the 20th century is just as responsible for the destruction of woodcraft knowledge as the “woodsman” who ignores the techniques used by woodsmen in the second half of the 20th century. Once we abandon these arbitrary notions about what knowledge is useful and what knowledge is not, we can move forward towards more well rounded knowledge of woodsmenship, and beyond this philosophical “us vs. them” and “traditional vs. modern” nonsense. Certainly, one is free to enjoy the outdoors as they see fit, and going out with period equipment offers many educational and personal challenge opportunities. Many have gone into the woods with period equipment for educational reasons. People have climbed Everest in early 20th century gear, and have crossed Greenland with 19th century gear. All worthwhile pursuits. Or perhaps, if any of us feels like they are such accomplished woodsmen that living in the woods with modern backpacking gear is too easy, they may want to try it with retro gear for the added personal challenge. However if our goal is to be a well rounded and proficient woodsman, then I believe a more open minded approach is required. I believe that we need to look at the totality of skills and equipment available to us, without judgment or sentimentality and decide what works best and what will allow us to be most proficient in the environment we will encounter. I believe this approach much more closely resembles that taken by the woodsmen that preceded us.