Using the Sun to Find the Magnetic Declination in Your Area

Previously I have spoken about finding and using magnetic declination. It is one of the more boring, and dry, yet practically valuable pieces of bushcraft knowledge. You can see the original post here, although I will duplicate the content here as an introduction.

What is magnetic declination:

Magnetic declination is the difference between the place where the needle on your compass points (magnetic North), and the actual or true North direction in a particular area. That’s right, the compass does not always point directly North. Depending on the area of the globe where you are located, the difference can be quite significant. Failing to compensate for that difference can have important implications to navigation.

How do I find out the magnetic declination in my area:

Fortunately, the nice people at the National Geophysical Data Center of the National Oceanic and Atmospheric Administrations (NOAA) have been kind enough to create a magnetic declination calculator for us. You can go to the website here:http://www.ngdc.noaa.gov/geomagmodels/Declination.jsp, soon to be moved to http://www.ngdc.noaa.gov/geomag-web/#declination, punch in either your longitude and latitude, or just your zip code, and you will get the magnetic declination in your area.

What do I do with this number:

Here is the part that throws most people off, just because of the terminology used. Before we start, remember this: 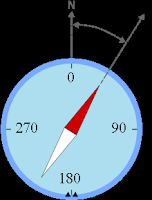 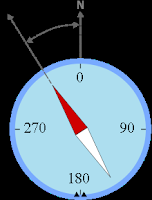 Now that you know this, you can put a mark on your compass, so you know where true North is depending on where the needle of the compass points. Some compasses have a wheel that you can turn, so all the markings are readjusted, or you can simply remember to do the math each time you take a bearing. If the declination is 10 W or –10 in your area, then to get true North, after taking a bearing just add 10 degrees to the number you got. So if your destination is at 260 degrees, then add 10 degrees and the true direction in which you need to travel will be 270 degrees. If the declination is easterly or 10, then just subtract in the same manner.

So, how do you calculate the magnetic declination in a particular area using the sun:

Well, this is a trick I learnt from a member (Wolfy) on Blades and Bushcraft. Ready? Here it is:

Add together the azimuths of the rising and setting sun (or of the setting and rising sun) as observed during the same day (or night) at the same location.   Find the difference between this sum and 360 degrees.  One half of that difference will equal the amount of local declination of the compass needle.

So, what does that mean? Well, in the same day, align your compass to the North and take a measurement of the number of degrees off of North where the sun raises. Then when the sun sets, take a similar measurement by aligning the compass North and then seeing how many degrees off of North the sun sets. Add the two numbers, subtract 360 from them, and divide the result by two. That should give you the magnetic declination in the particular area.

Here is an example:

If the sum of the taken azimuths is more than 360 degrees (as in the above example) the declination is to the east; if less it is to the west.

I know, I know, all this stuff seems unnecessary and annoying. However, my experience has been that when you are actually in the woods these navigational skills will be much more valuable than carving feather sticks or making spoons.