Two Cameras - What to use? What to buy?

If I am after the best quality image, especially in difficult situations, the hands-down winner is the Nikon D90. It does a wonderful job in low light and especially with my Nikkor 10-24mm f/3.5-4.5 zoom. It is a great combination which gives me good quality, a relatively compact kit and good low-light performance.

If I want a bit of fun and don't want to be dragged down by bulky gear (and the Nikon isn't that bulky), then I pick up the Olympus E-P3. The Olympus is the right size, has some nice fast glass to go with it (like the Voigtlander 25mm f/0.95, Olympus 12mm f/2 and 45mm f/1.8 lenses). There is also the lovely little Samyang 7.5mm f/3.5. The Olympus has in-body stabilisation and metering through the lens which doesn't require any electrical contacts on the lens itself so you can generally get correctly metered readings with almost any adapted lens.

It is; however, a love hate relationship with the Olympus. Some areas the camera just isn't up to it. The Olympus E-P3 replaces my earlier E-P1 and is a couple of steps forward and a big leap backwards. Issues with autofocus have been solved with a focus assist lamp, better lenses and better in-camera AF workings. In fact, the autofocus is very good indeed. Where it took a big leap backwards was with colour balance. The original E-P1 was pretty much right almost all the time (maybe somewhat warm under tungsten lighting but that's about it). The E-P3 colour balance is really quite poor; often too blue or too green. Worse still, it doesn't clean up nicely with the 'auto' function in Adobe Camera RAW.

Despite this, I have more fun with the Olympus and use it a lot - probably more so than the Nikon these days.

It is coming up to a time when I am considering upgrading camera bodies. For the Nikon it was going to be the D7000 but I am now thinking the D600 may be the way to go. It will work nicely as a 24mm full-frame camera and I have some full-frame lenses. The lens I use the most on the Nikon D90 is a DX lens - the 10-24mm zoom and it does very nicely as a great wide angle lens. But wait, the D600 can be used as a 10.5mp cropped sensor camera and 10.5mp is quite sufficient (and not much of a drop from 12mp). Problem solved.

For the Olympus, the Olympus OM-D E-M5 gives me a camera with a far better sensor and low light abilities that are better than the D90 and almost a match for the D7000. It is cheap enough and weather proofed. The matching weather proofed 12-50mm lens is an average performer but it does give a "macro" image down to an area of 48 x 36mm (Olympus I believe calls this 1:2 which it would be if the camera had a 35mm full-frame sensor). The flip out LCD would be nice too.

I am in no rush and I would be interested to see if Olympus announce something that is more "semi-professional" but I am guessing that the pending Four Thirds replacement of the E-5 will put that hold for another year.

I cannot end a post without adding a pic, so here is one in Sydney's Hyde Park taken with the Olympus E-P3 and Voigtlander 25mm f/0.95 set to around f/1.4 - taken at night of course... 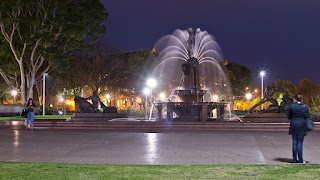