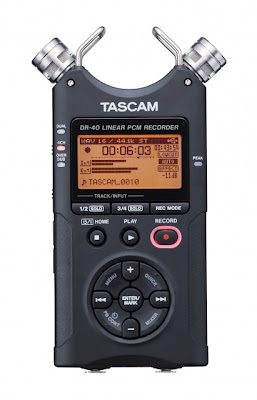 Having received Santa's approval, I walked into B&H the other day (by the way, it was packed...as in really crowded. The line for the cash payment option at the cashiers almost extended to its front door!) to explore my options for an upgrade in my field recorder.

I currently use the Marantz PMD620 which I've had for a couple of years. It has served me well, but has begun to show its age (or rather its use). The only issue I've had with it is its small screen, and when I need to change settings whilst in the field, I find difficult especially if my hands are slippery with sweat (as in Kolkata, for example).

Oh, all right...I admit it. The PMD620 is really perfectly fine but I wanted a Xmas gift. End of story.

So after deliberations, I sprang for the Tascam DR-40 Field Recorder, which features built-in condenser microphones that are adjustable depending what the sound source is. Ambient would require the microphones to be wide apart, while an interview from one source would benefit from the mics to be adjusted closer together.

The B&H sales guy suggested I also bought the power supply (it only comes with a mini USB cable and a 2gb SD card) but since I'll be using it outdoors, I wasn't interested. It's much cheaper than the Marantz PMD620, but is also larger. As I can't open the box until Xmas, I can't compare them side by side. I held the Tascam at B&H, and it's a handful...which is what I wanted. The Marantz felt a little flimsy. I suspect the sound quality won't differ much, despite the directional microphones...but I'll soon find out. I will still use the Marantz when I need to be discreet whilst recording...pretending that it's a iPod or something.

Incidentally, Tascam is a division of TEAC Corporation which, as most audiophiles know, is a huge name in the audio world. I recall having a TEAC high-end cassette recorder, along with a heavy-duty TEAC amplifier some years ago.
Posted by bella at 2:57 AM