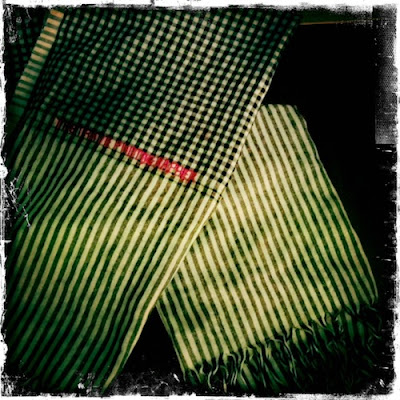 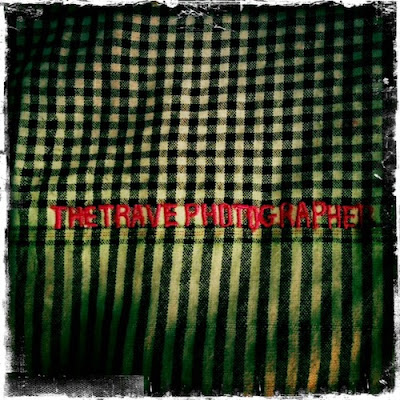 While in Siem Reap, I dropped by the Old Market and stocked up on traditional Khmer scarves with the intention of having them embroidered with The Travel Photographer logo, and making a fortune selling them online.

While having lunch at The Soup Dragon, I showed the manager my The Travel Photographer's pouch that had that logo, and asked if he knew of a store that could duplicate it...and indeed he did! Scribbling the name and address of the place in Khmer on a scrap of paper, he said it wasn't too far from the restaurant, and that it was just opposite a secondary school which used it to embroider its tshirts etc. Perfect!

I hired a tuk-tuk driver (Chen, who was to remain as my driver for the duration of my stay) and we went looking for the embroidery shop. I expected to see a computer-driven embroidery machine, but all I saw was an electric sewing machine and a woman who assured me (through Chen) that she could duplicate the logo quite easily. I wrote it down in my best capitalized handwriting, gave her my old krama for a trial run and was told to return in 20 minutes. Perfect!

Spending these ensuing 20 minutes thinking of having all my stack of kramas embroidered with my logo, returning to the US and selling them online at a monumental profit, was very enjoyable. However, these dreams of untold riches came tumbling down when I was returned my old krama with the logo as you can see from the above photographs...the L in Travel was deemed superfluous by the semastress and I got The Trave Photographer instead.

The poor woman was mortified and tried to convince me she could fix the error...but I just laughed it off. Yes, my get-rich-quick scheme collapsed because of a dropped letter. The moral of the story is this: make sure your outsourcing contractor can write English.

That being said, the mistake on this scarf (especially as it has been worn for a number of years) could well make it very valuable. As an example, the mistakenly inverted Jenny stamp was auctioned for $1 million!
Posted by bella at 2:30 AM