The Opinel No. 10 knife is one of a series of folding knives made by this French manufacturer. They have been widely used for a long time, and come in different sizes. 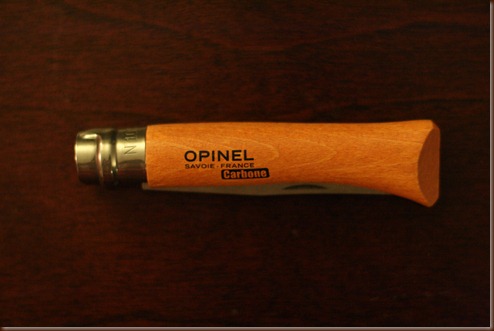 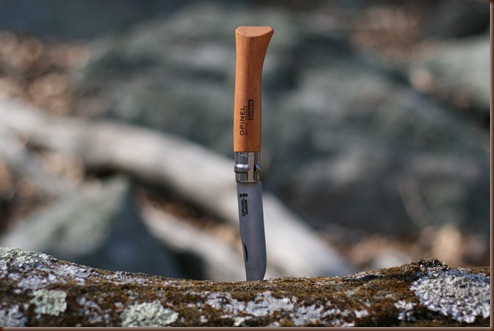 The Opinel knives have been used for general pocket knife for a long time. They come in may different sizes, so they can serve as a small pocket knife or as a much larger tool. The one I have chosen for the review is the No. 10 Opinel, which has a blade that is close to 4 inches, which is what most people in the bushcraft community look for when selecting a knife for general tasks. Whether that is right or wrong, I will leave out of the discussion.

When compared to the Mora 1, the Opinel 10 is a somewhat larger knife, mainly due to the fact that it is a folder. The blade is a similar length, but it is a bit wider and just slightly thinner. The Opinel has a convex edge as opposed to the Mora Scandinavian/single bevel grind. The convex however is very thin, creating a fine cutting edge. If you do not pay close enough attention, it may appear to be a full flat grind. The handle of the Opinel is much longer than that of the Mora 1 mainly because it needs to serve to hide the blade when it is folded. It makes for a very comfortable handle. The folding mechanism of the Opinel is entirely contained within the first one inch of the handle. It is simply composed of a metal ring with a slot in it. When the slot is aligned with the blade, the blade can fold. When the ring is turned, and the slot is moved out of alignment with the blade, the blade is held open. This makes for a very secure locking mechanism, and is fairly distinct when compared to other folding knives, which tend to be either liner or back lock. With the Opinel there is no chance of accidentally pressing the locking mechanism and releasing the blade. 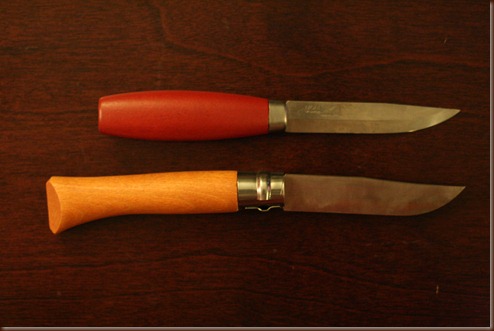 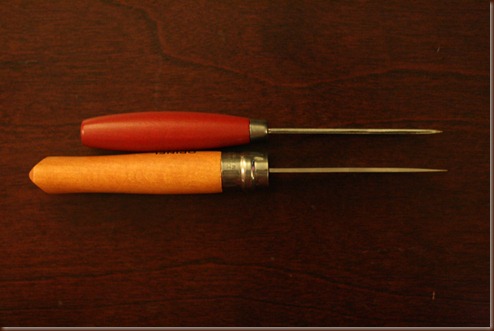 As this is the first folding knife I have tested here, I was very interested to put it through some actual use. The first test was a batoning one. I used a three inch piece of hickory. The knife did not perform as well as the Mora 1, or any of the other fixed blade knives. With a tough wood like hickory, the folding mechanism on the knife continuously failed when the blade had to be forced a significant distance into the wood. It did not break, but kept twisting as a result of the impacts to a point where the blade would become unlocked. The picture you see is the furthest I was able to get the blade into the wood. Once I had to apply pressure to the handle, the above result was observed. I am sure the knife would work better in less tough woods, but here it consistently failed. The result was the same when truncating. 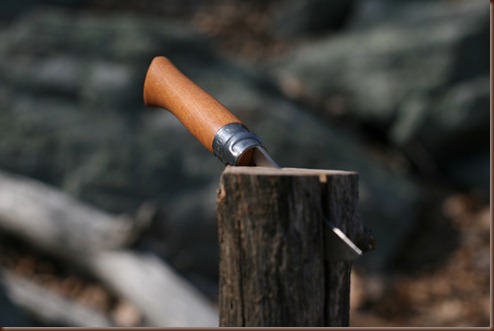 The knife performed well as a cutter. The thin convex edge made for a fine and sharp blade. It served well to make feather sticks. As with all other convex edges, you have to get used to the geometry, but it works very well. 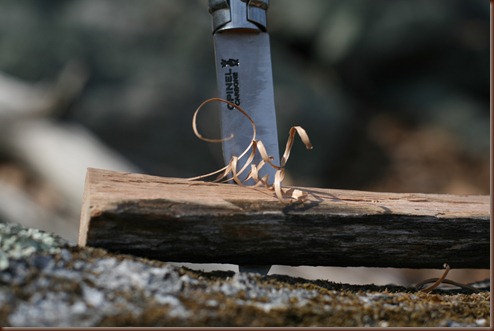 Overall, the Opinel No. 10 makes for a very good pocket knife. It will serve well for small tasks and other camp chores, and the locking mechanism holds up well when compared to other folder designs. However, I would not use this knife without a heavier tool like a hatchet. It is not at all suited for heavier tasks such as batoning. In an emergency it can be put to work, but this can not be its regular job. It does not hold up to such tasks nearly as well as a fixed blade knife, even one with a small tang such as a Mora. In fact, with Opinel, I would probably opt for one of the smaller models, as for me it would serve primarily as a light task pocket knife. As such, the 4 inch blade might be unnecessary.