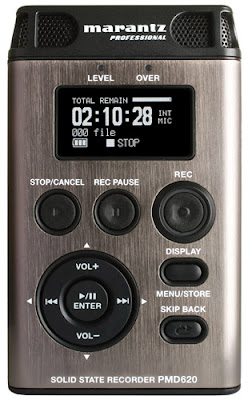 I finally succumbed. I dropped by B&H yesterday to check on whether they had any Canon 5D Mark II batteries in stock, and walked out with a Marantz PMD 620 audio recorder.

But first things first; the LP-E6 Rechargeable Lithium-Ion batteries are unavailable. The salesman said that there were none available in the United States...perhaps an exaggeration, but probably not that far off. I guess the alternative is to buy a Canon 5D Mark II just to have a spare battery. In my view, Canon mismanaged the supply of both camera and accessories, and will eventually suffer the consequences.

Now about the Marantz PMD 620 audio recorder: I decided to replace my Micro Track which was showing its age...and it didn't perform that well in Bhutan last October. I had replaced its original microphone which had been damaged, but it still didn't perform as well as it should have...hence the new Marantz PMD 620.

I figured a new audio recorder would be useful during my forthcoming photo-expedition to South India to document Theyyam performances...I'm hopeful that the accompanying music and ambient sound during these performances will add much to my photographs.

I was glad that the Marantz PMD 620 was sold by B&H with a free 2gb SD card (it comes with a 512mb card), a free carrying case and a $100 rebate from Marantz. I briefly tested it yesterday, and think it'll work well. Why did I choose it over the other models? Well, because of these incentives.

For a detailed report on the Marantz PMD 620, check Transom Tool. I will put it through its paces in India and will write my own on my return.
Posted by bella at 5:31 AM