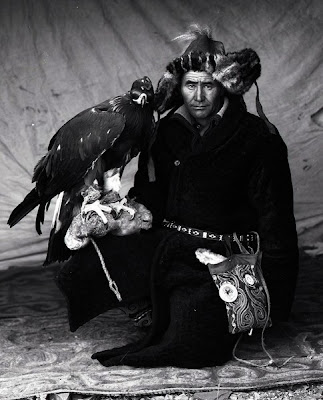 With the Golden Eagle Hunters of Mongolia, Delaney presents a rich and beautiful collection of portraits and landscapes that capture an intimate glimpse of the ancient way of life for the nomadic Kazakh tribe, who date farther back than the 15th century and are once again in danger of being eradicated.

Among many Kazakh traditions is the ancient art of hunting with trained birds of prey. The tradition is believed to originate in Central Asia some 6000 years ago and was adopted in Europe and other countries. Historical chronicles relay records of Kublay Khan's lavish hunting trips in autumn and winter involving thousands of people and horses, with falconers in the thousands.

Kazakhs catch and train golden eagles, common throughout Central Asia. These huge birds weigh up to 15 pounds, and have wingspan of seven or eight feet.