Gear Update: Reducing the Weight of My Cooking Kit

For some time now, I’ve known that my cooking gear was heavier and larger than it needed to be. I carry a 2L pot, but virtually never have to boil two liters of water any more. I carry an 8oz fuel canister, but have never come close to using it up on a single trip. However, I have kept the kit because it has functioned so well for me. The Open Country 2L pot, the Kovea Spider stove and a 8oz MSR fuel canister fit perfectly together and offer all season cooking capability on a stable and easy to use platform. 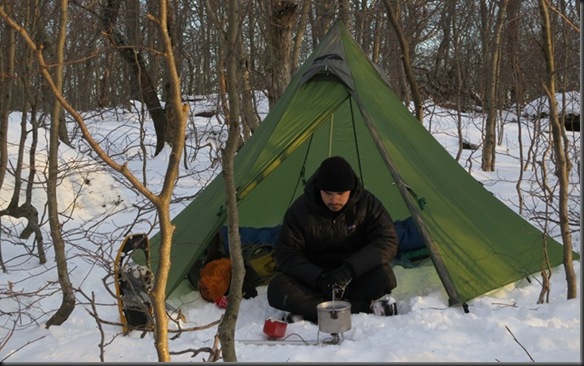 With deer season coming around however, I have finally gotten more motivated to put my cooking kit on a diet. My goal was to reduce the weight, but more importantly the volume of the kit.

I considered several options. I thought about using a kit based around an alcohols stove and a cup. I do in fact have such a minimal kit, which I will share at a later time. I also considered a small canister mounted gas stove. I didn’t use any of those options for one reason-they do not offer good all season operation. I like to use as much of the same gear year round as possible. I don’t like having one stove for summer, another stove for fall, winter, etc. I want my cook kit to use the same set up no matter what time of year it is. Unfortunately, both alcohol stoves and canister mounted gas stoves do not function well in winter. With care they can certainly be utilized in cold weather, but they are far less than ideal.

The solution was the same one that I used in my last cooking kit. That is to use a remote canister stove. My favorite in that category, as you guys already know is the Kovea Spider that I currently use. It is light and compact, yet offers good all weather performance as it can utilize a wind screen and liquid gas operation due to the remotely mounted canister.

So, once I decided to stick to the same stove, my weight and volume reduction strategies became limited. It doesn’t take a genius to figure out that the pot and canister are the major places where weight and volume can be cut.

Here is a side by side comparison between my old and new systems. 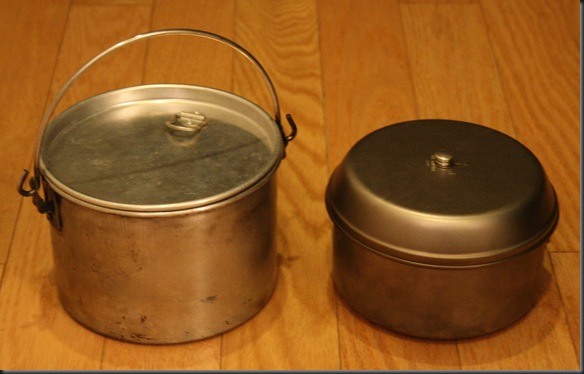 The 2L pot (left) had to go. I replaced it with a 1L titanium pot from Snow Peak (right) that I have had for many years. They haven’t made this model in a while. It came with handles on the side, which I have removed. I’ve also added a small knob on the lid so it is easier to remove. The lid can still be used as a plate, although I have not had the need for one. 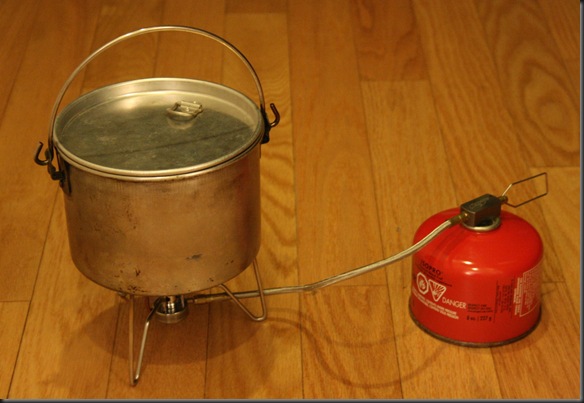 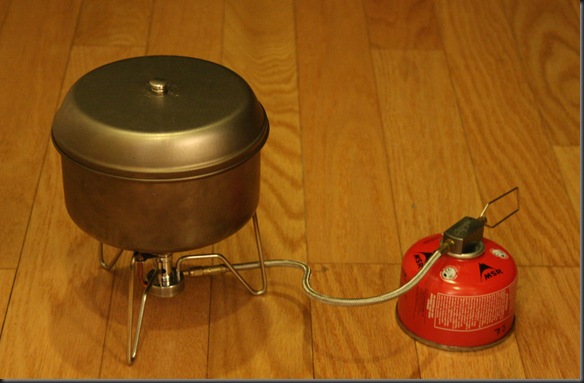 The smaller pot wouldn’t accommodate the stove as well as a 8oz fuel canister, so I switched to one the 4oz MSR fuel canisters that they released in the beginning of this year. The result was a smaller, lighter cooking kit that was still self contained, keeping all of the components within the pot. The kit is completed with an aluminum foil wind screen, a Mini BIC lighter, and a bandana. It is closed off with a rubber band. 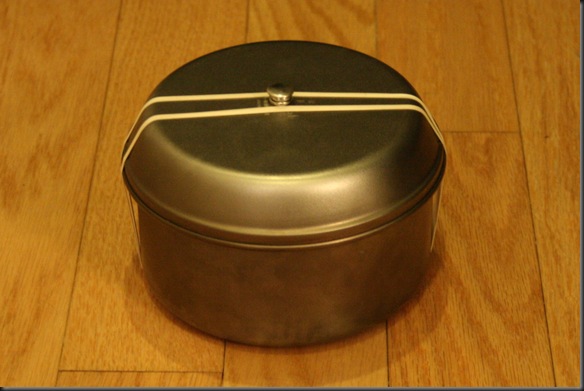 Here is a table with the weights of the two cooking kits.

As you can see, the weight of the kit has been reduced by 5.4 oz, bringing it down to 1 lb total. More importantly, the volume has been reduced from 2L to 1L. Now, I know this is not a drastic reduction. Initially my intention was to do a much more significant reduction of both weight and volume. Unfortunately, I could not figure out a way to do it yet still have all season performance capability. I could easily reduce the kit for three season outings, but this is as small as I can go with a kit that would still allow me to effectively melt snow for drinking water during winter trips.

A downside is that while the new 4oz canister is lighter, it is actually heavier in terms of canister weight per fuel stored. It stores half the fuel of the 8oz canister, but weighs empty more than half the weight of the 8oz canister. That is typically the case. A larger contained can hold more volume while weighing relatively less. So, if I had to bring 8oz of fuel using the smaller canisters, their empty weight would be 7oz as opposed to the larger canister’s empty weight of 5oz. It is indeed a downside, but since I very rarely need more than 4oz for a weekend trip, it’s not a problem. It is also necessary to keep the volume down.

Since my new pot doesn’t have handles or bail, I use the bandana to lift up from the fire. Also, due to the lack of a bail, it can’t be suspended over a fire. It’s a minor downside, although there is little need to suspend a small pot like this one. I just use it directly over the fire.

The only other thing I will look for is a light nylon bag in which I can put the pot. That way I don’t have to worry about any sooth getting on my other gear when i have been using the pot over a fire.