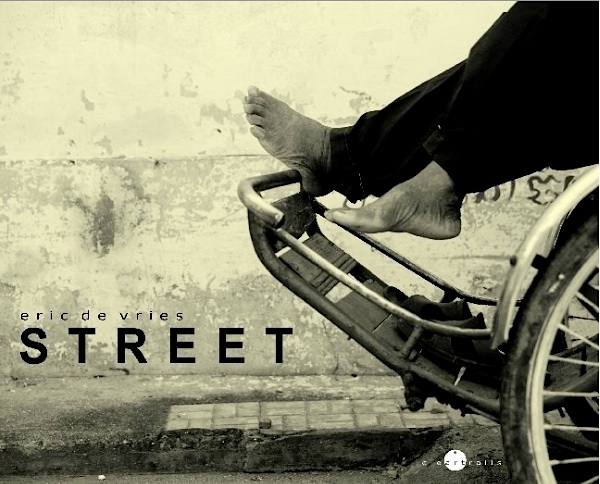 By the time this post is published, I should be flying to Siem Reap (via Abu Dhabi then Bangkok) arriving on the 17th November around midday. So it appears timely to introduce a photo book on Cambodia by Dutch photographer Eric de Vries. Perhaps he'll be attending the Angkor Photo Festival as well.

STREET is all about street photography. All pictures were taken during Eric's courses, private tours and workshops in 2011. The photographs are mostly in black and white except for the complete series 'Darkness of the White Building'. This is Eric's fifth book (220 pages, landscape) and is part one of the trilogy THE WORKS OF ERIC DE VRIES.

Eric de Vries lives and works in Cambodia, the country he’s been travelling to since 2000. He is currently working on two long-term projects called ‘Still Life in Khmer Style’ that covers landscapes, temple scenes and buddha statues and ‘Hello Darling’, which is about the girlbars in the towns of Cambodia.

Interestingly, Eric's website lists Hanuman Tourism Cambodia, which is affiliated to the hotel I am staying at in Siem Reap. It also organized some of my photo shoots when I led a photo expedition to Siem Reap in February 2006.
Posted by bella at 3:00 AM