Earlier you saw a video I made about grinding, or re-profiling an axe. Without getting bogged down in the terminology, I just showed how to thin out an axe bit to the desired thickness using a file. You can see the video here.

I have received several questions, asking about more details, so I decided to make this post so I can better diagram the process.

The first question of course is, “how thick should the bit of an axe be?” The answer will depend on what you want to do with the axe, and on which part of the bit you are talking about. Here I will try to give the answer along with the direction for each step of the re-profiling process.

Let us start with an axe which has had very little work done to the bit. Let us also assume that it is fairly thick at the bit. Clam down the axe head, and get a sharp file. I like to use an 8 inch, 200mm, single cut file, but that is a matter of personal preference. I know people who use cross cut files and files of varying lengths. 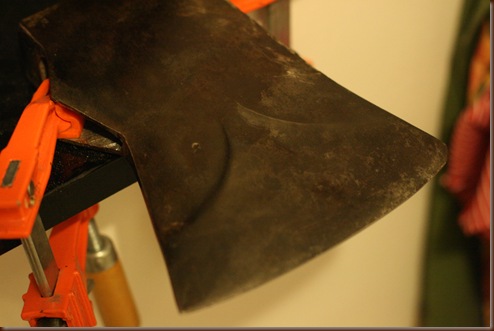 For the first step, we will work on the part of the bit that is located between 1/16 from the cutting edge and 1 inch back from the cutting edge. This is the first section of the bit that we will have to thin out. For now, we will not be touching the cutting edge at all. This part of the bit will effect the penetration and splitting ability of the axe. If you want an axe that will penetrate deeply into wood, then you want this section to be as thin as possible, so it provides the least resistance when entering the wood. On the other hand, if you want a splitting axe, you want this section thick, so it can push apart the fibers. For the same reason, a thicker convex here may help you with softer, more flexible wood, because it will help pop out the chips when chopping.

For my general purpose axes, I like to have this part of the bit be at about a 20 degree angle. That means that when filing each cheek, I will be filing at a 10 degree angle from the horizontal. 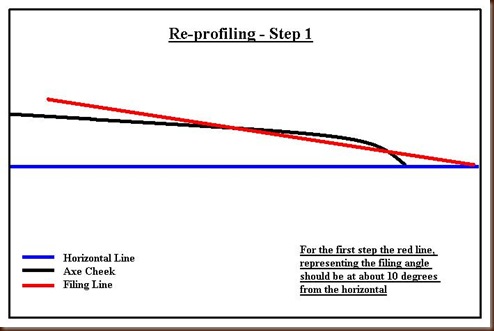 Position the file at a 10 degree angle from the horizontal, and begin filing, maintaining the same angle along the whole bit. 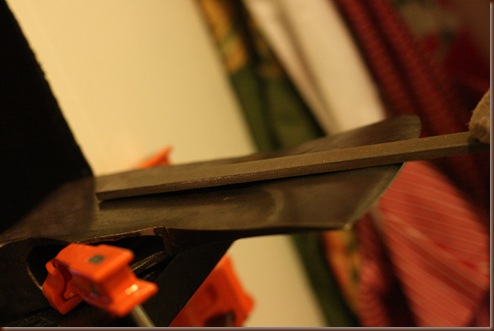 While maintaining the same angle, you want to create a uniform thickness along the whole bit (minor variations aside). 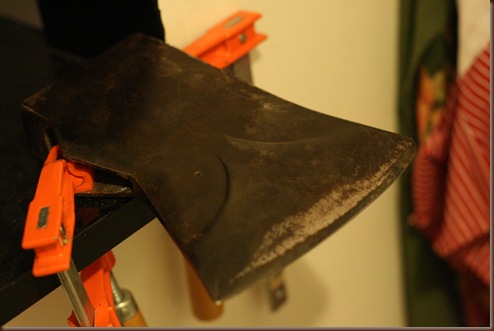 On an axe that has cheeks which have been convexed from heel to toe, this will require you to remove more metal from the middle of the head than the edges, as the head is thicker in the center than the sides. 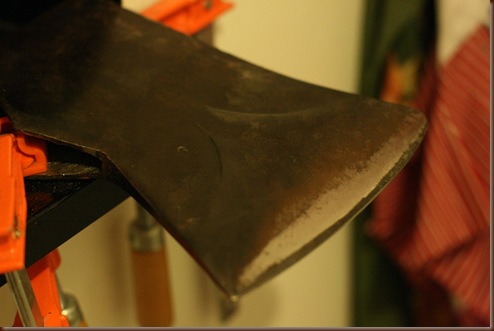 Continue this process until you reach about 1/16 from the cutting edge. 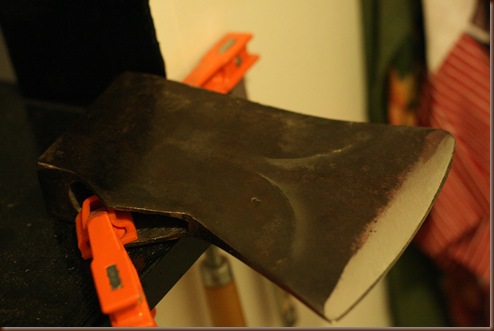 This part of the convex can also have a different and separate thickness. A thinner convex here will allow for better penetration, and glance less off the wood when approaching it at a steep angle. This makes a thinned out convex on this section good for carving as well as chopping. A thicker convex here will make the edge more durable, and require less sharpening, along with making it less prone to damage.

For this step, you may want to start with a 30 degree overall angle on the bit. I like it a little thinner, but that is a decision you can make for yourself after using the axe. The final step will thin out the bit a little further anyway. 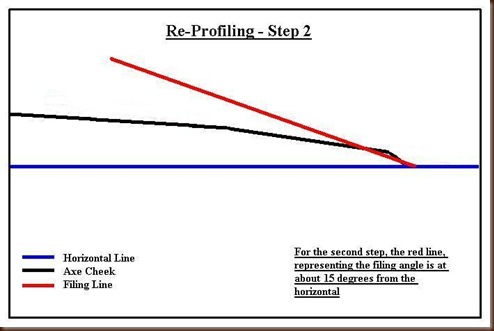 Position the file at a 15 degree angle from the horizontal (in the picture the file is on its side for demonstration purposes only), and begin filing the area between the cutting edge and the already filed down back section of the bit. Again, maintain a uniform thickness along the bit. 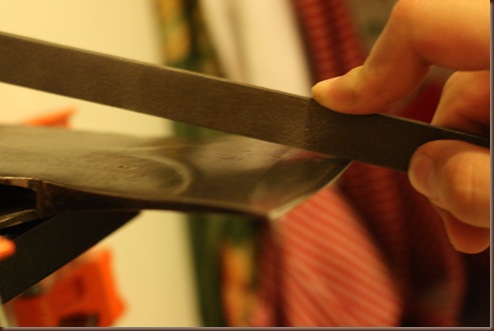 All that is left to do now it to smooth out the transitions between the different filing angles, and turn the surface into one continuous convex. 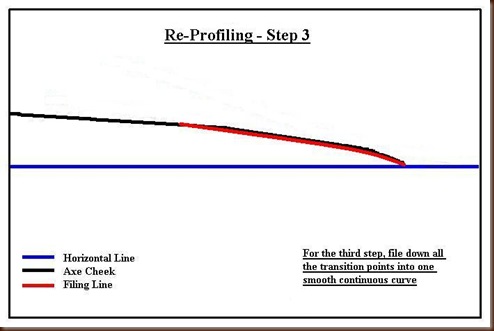 This process will remove more metal, further thinning out the convex. During this process you can make adjustments to the final shape of the convex by removing more or less metal from the transition point between the two filing angles. At the end the final convex will be at about 24 or 25 degrees overall. 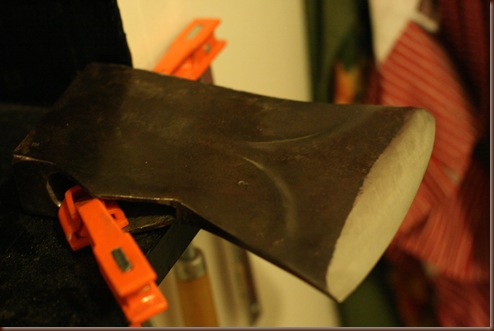 All that is left to do now is to flip the axe head over and repeat the process on the other side. Something that may help with establishing the desired angle is to get an axe whole grind you already like, and try to approximate it. You can usually do that by feel, just by pouching the two bits. After some practice, you will be able to see whether or not you like the grind just by holding it between your fingers.