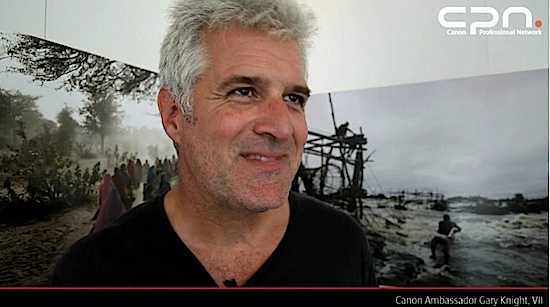 Canon Professional Network has featured five Canon Ambassadors – photographers Michael ‘Nick’ Nichols, Gary Knight, Ziv Koren, Frits van Eldik and Paolo Pellegrin, and asked them what they’ve learnt from their years of experience and what advice they would offer to young photographers starting out on their photographic careers.
I thought I'd feature Gary Knight's interview here...this is purely a personal choice based on what he advocates "keep it simple...and don't think too much"; advice which I always follow and advocate, and since I met Gary in Bali some years ago...I know his advice is not a fluff piece, and that he speaks his mind. So his interview is highly recommended to young photographers.

Gary Knight began his photographic career in Thailand in 1987 and he lived and worked in the Far East until 1992. In 1993 he moved to the former Yugoslavia and documented the civil war there. In recent years he has covered the invasion of Iraq, the occupation of Afghanistan, the civil war in Kashmir and the Asian Tsunami. One of the founders of the VII Photo agency in 2001 his work has been published by magazines all over the world and he has been a contract photographer for Newsweek since 1998. He is one of the founders of the Angkor Photo Festival, a registered charity in Cambodia; a board member of the Crimes of War Foundation and a trustee of the Indochina Media Memorial Foundation.