A Brief History of the Collins Axe Company

For a while now I’ve wanted to look into companies that are still manufacturing axes and trace their history. The reason is that many companies have been bought, resold, and worked in collaboration with other manufacturers. As a result, the products have often varied accordingly. When trying to select a tool, those can be important considerations. 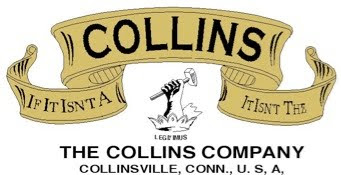 In 1826 three men, Samuel w. Collins, David C. Collins and William Wells, formed an axe manufacturing business under the name Collins & Co. They opened a manufacturing facility in South Canton, Connecticut by the Tunxis River. In 1830, the village where the factory was located was renamed Collinsville, and the river was renamed to the Farmington River.

The location for manufacturing was chosen because of the readily available high quality iron produced by a local company, Watkinson & Co. The company made a wide variety of edged tools in addition to axes. The axes gained a particularly high reputation, and were well finished and ready to use out of the box.

In 1834 the company had to reorganize due to financial difficulties, and began functioning under the name The Collins Manufacturing Co., even further expanding its product line. The company was again reorganized in 1843 as The Collins Company.

Some brands produced by Collins over the years include: