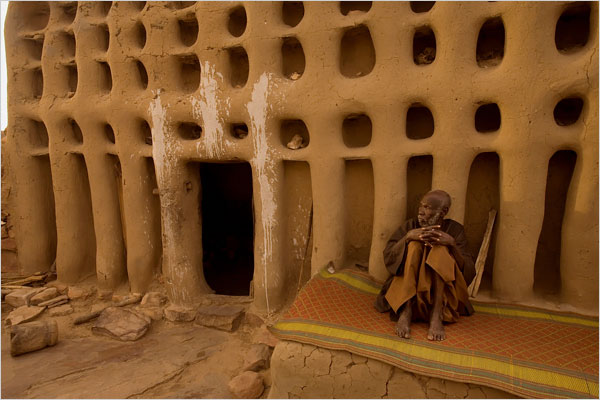 Photo © Aaron Huey/NY Times -All Rights Reserved
The New York Times features a slideshow of Aaron Huey's photographs of the Dogon area of Mali. The Dogon, one of Africa's most isolated ethnic groups, live in the central plateau region of Mali, south of the Niger bend near the city of Bandiagara in the Mopti region. The population is estimated at between 400,000 to 800,000.

The Dogon are best known for their mythology, their mask dances, wooden sculpture and their architecture. Partly because Dogon country is one of Mali's major tourist attractions, there has seen significant changes in their social structure, culture and belief system.

Joshua Hammers' accompanying article makes a great read, especially as it is spiced with passages such as this one:

"As we prowled around this Flintstones-like world, my photographer colleague wandered off alone. Suddenly I heard a burst of agitated voices, followed by the sight of the photographer, his three cameras dangling from his neck, racing down an alley with a half-dozen Dogon men close behind. He had ventured into a temple used for animal sacrifice, and his presence, as the Dogons saw it, had grievously polluted the site."

Aaron Huey's photographs are mostly of Tellem burial caves in the Bandiagara cliffs, but a few are of the Dogon people themselves. However, Aaron has a blog in which he features more of his Dogon photographs as published in the Smithsonian magazine.
Posted by bella at 2:56 AM