A Look At The Zoom H1

I've blogged a couple of times about the H1, the new handheld audio recorder from Samson Audio, and what seemed to be a handy portable stereo recorder at an unheard-of $99 price.

I haven't bought the H1 (as I already have a Marantz PMD 620 which I'm happy with), but a number of my readers have expressed their interest in seeing a review...so the above movie by Shawn Harrel will do just that.

As I expected, the H1 seems to feel a little flimsy, it has a few quirks, but does the job quite well. The price can't be beaten, so I predict I'll see it used by emerging photojournalists on a budget testing multimedia waters.

Speaking of multimedia: I have my new Canon 7D next to me as I'm writing this, but I have yet to really test it. I've ignored the manual as always, fiddled with it and so far it's quite intuitive, especially to a long time Canon user like I am. I'll be putting up some photographs as soon as I can...but one thing for sure: the 8fps is great! 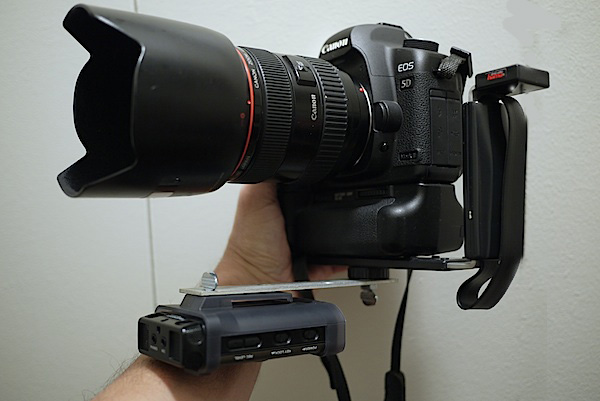 In the meantime, I've added this cheap rig to my 5D Mark II. It's my Marantz audio-recorder attached to a standard mounting plate from Home Depot, which in turn is attached to the camera's tripod socket. From my Mamiya medium-format years, I had an old Hama grip that I also attached to the tripod socket, and it gives me much better control over the camera when I'm filming video.