Traditional Camping and the Environmental Ethic – A different Perspective

A few days ago, a fellow blogger, posted an essay by Steven M. Watts titled Traditional Camping and the Environmental Ethic: Trail Food For Thought.

The article attempted to present a different approach to environmental conservation to the one that predominates the outdoor community today, namely leave no trace. Steven Watts contends in his essay that the leave no trace principle is mistaken in thinking that it has less of an environmental impact than what he calls “traditional” camping, i.e. chopping down trees for shelter and fire, hunting and foraging for food, etc. In his opinion, the resources required to create the technology necessary for the leave no trace approach (stoves, nylon tents, etc) has much more of a negative environmental impact than traditional camping. Since the article is titled “Trail Food for Thought”, and yesterday being Earth Day, I figured I would put in my $0.02. 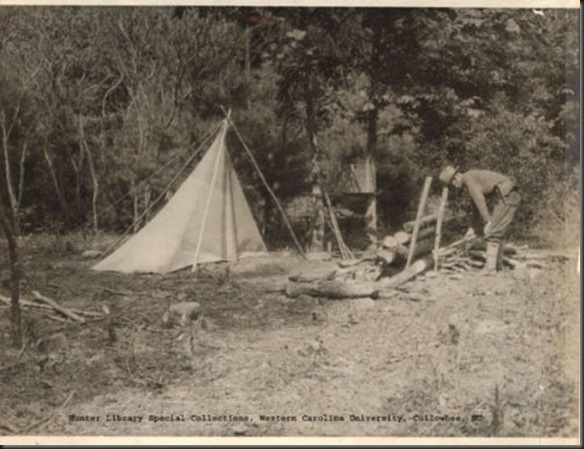 In my opinion, the article is overly simplistic in its approach to the topic, while at the same time overly romanticizing a golden age of traditional camping. I believe both of those things lead to misguided conclusions.

Let’s start with the romanticism. Steven Watts defines “traditional camping” as the type of camping done by people like Nessmuk, Horace Kephart, Daniel Carter Beard, Ernest Thompson Seton, Robert Baden Powell, Col. Townsend Whelen. In his opinion what they did was very different from what he calls “the tree-hacking, tin-can strewing hordes of chumps that literally hit the woods following World War II”. After all, let’s not forget that it was exactly those people that by the early 70s had rendered every publicly accessible piece of forest completely covered with garbage and fare damage.

Now, Mr. Watts distinguishes those people from “true” woodsmen like Nessmuk, Kephart, et al, in part because the woodsmen did not tend to go through the forest, but were more sedentary, a point which I don’t believe to be necessarily accurate, nor relevant to the discussion on environmental damage. The article is a bit vague on this point, so I’m not sure what the author intended.

But let’s leave that aside, and assume that he was giving men like Nessmuk and Kephart as examples of a more environmentally friendly type of camping. Mr. Watts is in fact correct that their gear made less of an environmental impact in many ways. Much of it was old equipment, made of natural materials. Granted, it is an oversimplified view, as both Nessmuk and Kephart had state of the art technology, many times from abroad, but let’s leave that aside and assume the best of them.

Even while looking with rose colored glasses however, even the most casual reader of the above authors will point out that their method of camping was not sustainable. For example, in his book, Nessmuk speaks of chopping down one fully grown tree each night for fire and another fully grown tree for shelter. During the only ten day trip he recounts, he writes of killing three deer, which he left to rot after eating some of the meat for dinner. Kephart on the other hand makes numerous references of mule trains carrying his equipment into the woods and how to chop and nail trees to make camp furniture. Regardless of whether their gear was made from fairy dust, it doesn’t take an environmental expert to figure out that if every camper and backapcker out in the woods today took the same approach, there wouldn’t be a single tree left standing in any of the forest of the US, nor will there be a single animal left alive.

I think a large reason for what I see as the error made by Steven Watts, is that the above romantic view of woodsmen from the past is mixed in with an overly simplistic approach to environmental conservation.

It may very well be the case, or let’s at least say for the sake of argument that it is, that each individual trip made by Nessmuk caused less overall environmental impact than does a trip by a modern camper because of the high amount of resources the production and transport of his gear requires. What Mr. Watts neglects however is that environmental impact can not simply be observed as abstract numbers. Pollution, resource depletion, etc have very different impacts on different areas and local environments. So, while the production of a nylon tent might use up many resources around the world, the two fully grown trees that were just cut down for camp were concentrated within the same local area. Overall the global production might have a larger environmental impact, but the local consumption of resources will have a much larger and more negative impact on the particular forest and its biodiversity. 100,000 campers using modern tents and stoves uses up fossil fuels, causes CO2 pollution, etc. 100,000 campers in your local forest, each using up two fully grown trees for camp each night and killing a deer for dinner, turns the forest into a parking lot within six months.

Now, we shouldn’t be overly simplistic in the other direction either. Conservation efforts require proper maintenance of wildlife, which includes cutting down trees and hunting. However, it has to be done within the modern method. The practices of men like Nessmuk, Horace Kephart, Daniel Carter Beard, Ernest Thompson Seton, Robert Baden Powell, Col. Townsend Whelen are not sustainable despite how much we may wish they were.