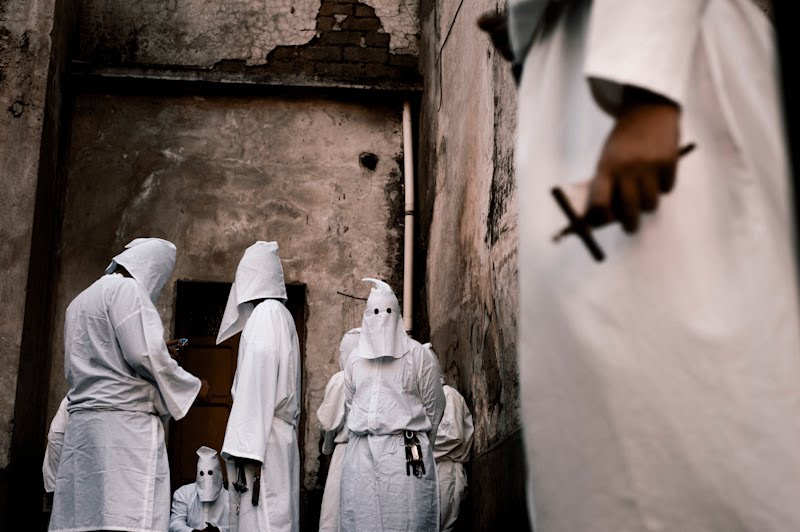 Out of his many lovely photographs of this photo essay, I chose the one above as the one that I prefer because of Roberto's use of layers.

Roberto Boccaccino is a freelance photographer. Most of his work is focused on social and geographical storytelling, and he was published by Italian and International magazines such as Foto8, Private Magazine, IO Donna, Stiletto, Euroman, etc. He recently attended the Advanced Visual Storytelling course at the Danish School of Media and Journalism in Aarhus.

The Doomsdays photo essay is about a traditional penitential rite in the southern Italian town of Guardia Sanframondi which is held every seven years. It is the largest self-punishment ritual in the Western world, and is locally known as the “Riti Settennali di Penitenza”.

The ritual starts in the week following the Assumption, when more than a thousand men (and some women), dressed in white and wearing hoods to hide their identities, beat their chests and flagellate their backs with sharp instruments, as a sort of mortification and an act of penance. The practice is also followed in Latin America and the Philippines.

In Islam, it's the Shi'as who have a similar rite which is practiced during Ashura, the 10th day of the month of Muharram in the Islamic calendar, when devout Shi'as commemorate the martyrdom of Hussein ibn Ali, the grandson of the Prophet Muhammad at the Battle of Karbala, by self-flagellating and beating their chests.

Thaipusam is a Hindu festival celebrated mostly by the Tamil community, when devotees may also practice mortification of the flesh by piercing their skin, tongue or cheeks with skewers.
Posted by bella at 2:28 AM