For about a year now I have been using the Fenix E01 flashlight both as an EDC, and as a portable flashlight that I keep in my possibles pouch.

In the world of flashlights, I would classify this one as a mini flashlight. Here are its specifications: 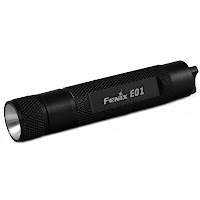 Light bulb: GS LED with a life of 100,000 hours
Battery: 1.5V AAA Alkaline or Lithium battery
Brightness: 10 Lumens
Run time: 21 hours
Size: 2.79 in (Length) x 0.55 in (Diameter)
Cost: $14
If you are like me, the above numbers do not say much. Trust me, they are good numbers! The flashlight is small and is a bit more than a AAA battery with a LED lightbulb. Similarly, 10 Lumens is a very good amount of light for such a small flashlight, and 21 hours of run time is impressive. To give more perspective here, look at the specifications for a mini flashlight which has been the standard for a very long time, and is probably hanging on most of our key chains; the MagLite Solitaire: 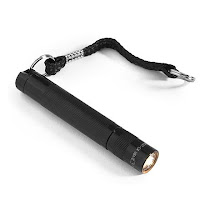 As you can see, the Fenix E01 is about four (4) times brighter than the familiar MagLite, and lasts about seven (7) times longer for the same size flashlight, and at a very similar price.

How is this possible you ask? The reason for the performance boost is a technological development which in the past year or two has become affordable enough to be used in low cost flashlights; namely, microchip regulated light emission. Unlike the MagLite, the Fenix E01 does not simply continuously feed electricity from the battery to the lightbulb. Instead it uses a microchip to interrupt the electrical signal so in reality the lightbulb is constantly being turned on and off. This is being done so fast that the human eye can not tell that the bulb is being turned off, and instead sees a continuous stream of light. It is these interruptions, that allow for such long running times at such high lumens.

That being said, do not be fulled, this is still just a mini flashlight. A good regular size flashlight may run at 80 or 100 lumens. This is however an excellent flashlight for when something small is needed.

It is not nearly as well polished as the MagLite Solitaire. It does not have a spare bulb like the MagLite, and the finish does not look as good. The performance however is so far ahead, that these are flaws that are easy to forget.

Oh, and did I mention it is waterproof?!
Posted by bella at 2:24 PM