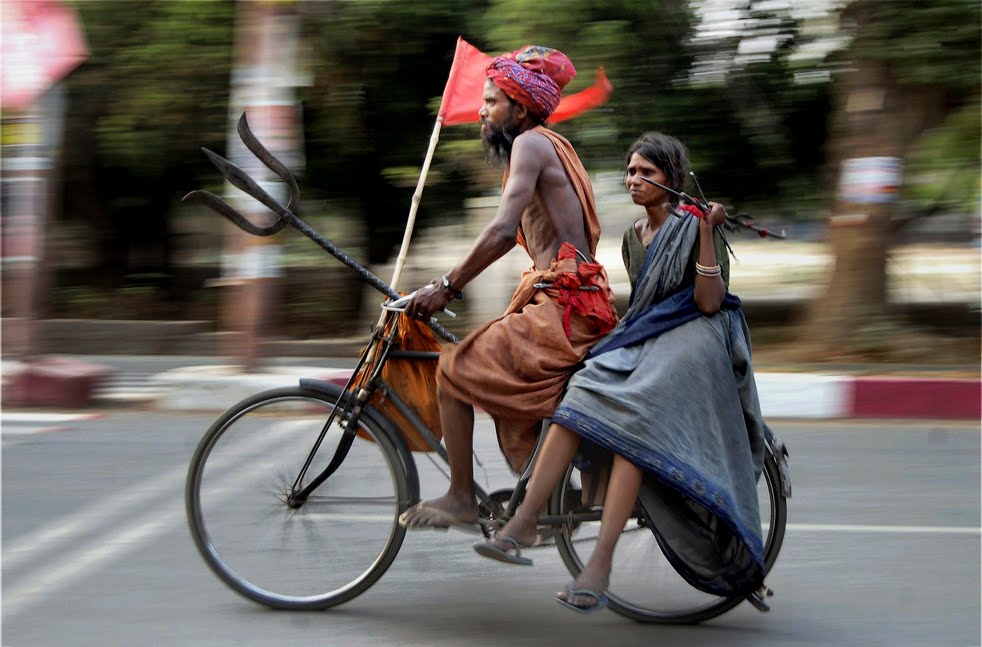 Photo Courtesy The Sacramento Bee
Here's an amusing photograph featured by The Frame, the photo blog of the Sacramento Bee. It's of a sadhu and a woman "returning after bathing at the Sangam, the confluence of rivers Ganges, Yamuna and the mythical Saraswati, in Allahabad."

It's uncredited on the SacBee blog, except to say it's from AP.

Although I have seen female sadhus (known as sadhvis) in Varanasi, I have rarely seen a sadhu in the company of a woman, and wonder what are these two returning to. To me, this looks like a man and his wife returning home from work. He's dressed in saffron cloths, and is carrying the Shiva trident, an accoutrement of his trade, while she's carrying some stakes.

I have seen and met countless of these so-called sadhus during my travels in India, and most of them are charlatans and con-artists. After all, it's rather an easy life they lead. They are given free food and alms, they ride public transport for free, they smoke marijuana whenever they can, and people generally give them a wide berth.

Naturally, there are also a few sadhus who are genuine ascetics, but these are rarely seen by Western tourists except at important Hindu religious festivals, such as the Kumbh Melas. However even there, the real ones are a minority.
Posted by bella at 2:36 AM