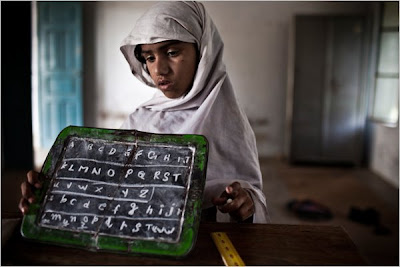 ©Zackary Canepari/NY Times-All Rights Reserved
I like Zackary Canepari's photographic style. Here's a gallery of his photographs documenting for The New York Times a few of Pakistan's madrasas, or traditional Islamic schools, that teach, feed and occasionally house children of the poorest familiest. Whether in Pakistan or elsewhere, some also teach a militant brand of Islam, offering no instruction beyond the memorizing of the Qur'an.

The article written by Sabrina Tavernise is interesting because it provided the background and the root causes for the growing popularity of madrasas in Pakistan; these can be applied to virtually everywhere else where there are such schools. Here's a quote from the article which is illuminating:

"Though madrasas make up only about 7 percent of primary schools in Pakistan, their influence is amplified by the inadequacy of public education and the innate religiosity of the countryside, where two-thirds of people live."

To that, I'd add the condition of extreme poverty of the families and communities that live in the areas where such schools exist. It is therefore right for the Obama administration to address the Pakistani government's inability to deliver basic services such as schools, health care, rule of law, etc. The Pakistani government has left a dangerous void, and politico-religious elements have been quick and adept in filling it.


Posted by TTP's non-robot from London
Posted by bella at 12:48 AM