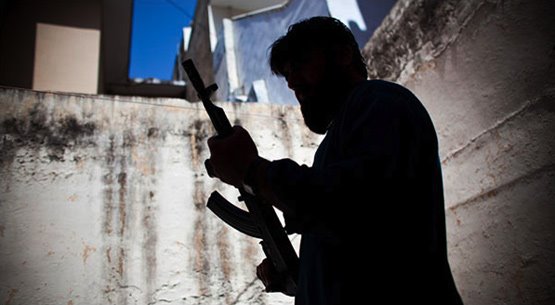 ©Zackary Canepari/The New York Times-All Rights Reserved
The New York Times's editors published an unusual apology on Friday. The apology relates to a picture appearing in a May 5 front-page article about the porous Afghanistan-Pakistan border, which showed a silhouetted Taliban logistics tactician, holding a rifle (above). The Times subsequently learned from the photographer that the rifle the Taliban tactician held was not his, and claims that had it known this information at the time of publication, it would not have used the photograph to illustrate the article.

PDN Pulse asks if its readers think this is over the line?

I don't think this is a major issue at all, especially since Canepari seems to have clarified the situation. Frankly, had the editors of The New York Times been half (nay, just one-hundredth) as meticulous with the blatant lies and obfuscations propagated by the Bush Administration which led to the Iraq fisaco as they are now with Canepari's photograph, as a nation we would have been the better for it, and we wouldn't be where we are now.

We all recall The New York Times published lies about the Iraqi's non-existent WMD program as fed to it by members of the previous Administration and their newspaper cronies, and subsequently "apologized" for it.

Update: For another take on the story of the staged picture, read Daniel Sheehan's post on his Photo Blog. He quotes Washington DC photographer John Harrington's view that Canepari "is likely to be persona non-grata at the New York Times, and his journalistic ethics will also likely give other editorial publications pause to hire him."

Of course, the editors of The New York Times who sold us sordid lies about the reasons for our occupation of Iraq are (with the exception of Judith Miller) not personae non gratae. Go figure.

Another Update: I knew my friend Asim Rafiqui would write of the New York Times' silliness in his The Spinning Head blog. He writes this:

"We are supposed to forget that this is also one of a number of American newspapers whose journalists failed to ask even the most basic of questions and failed to examine even the most public of facts during the build up to the invasion of Iraq. Their ethical reporters were on the front lines of journalistic jingoism, helping sell the war to the American public."
Posted by bella at 7:03 AM