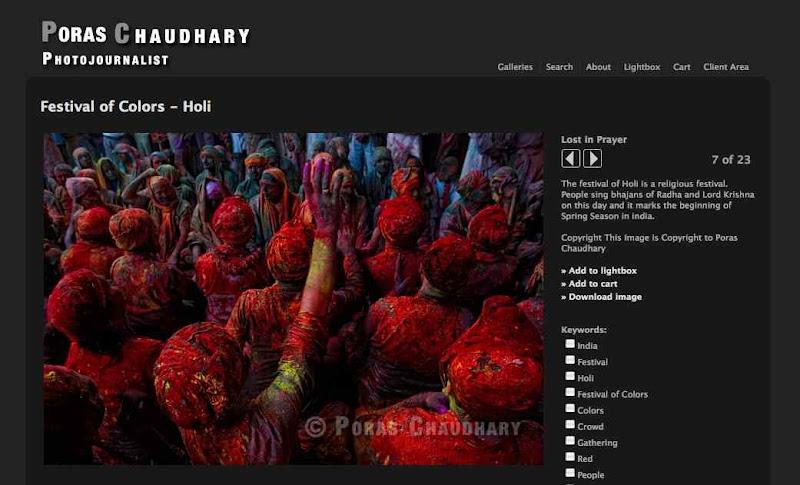 Poras Chaudhary is a freelance photojournalist and a documentary photographer, who started photography in earnest in 2005. Influenced by the work of various Magnum photographers, he is self-taught photographer and prefers highly saturated color work.

He won a number of awards including the Digital Camera Magazine’s ‘Photographer of the Year’ award in 2006, National Geographic Traveler’s photo contest Merit Award winner in 2008 as well as being a Runner Up in ‘Epson Color Imaging Contest 2008’.

While the above image is of Poras' gallery "Festival of Colors", I'd suggest you also navigate to his Ladakh gallery, where you'll see one of the best photographs of his collection; the three Bakarwal shepherds.

Holi, also called the Festival of Colors, is a popular Hindu spring festival observed in India, Nepal,Bangladesh, and countries with large Hindu diaspora, and is said to have a medicinal reasons. The spring season is believed to cause viral fever and cold, and the colored powders used during the festival are made of Ayurvedic medicinal herbs.

Perhaps we should try this out to combat H1N1 flu infections?