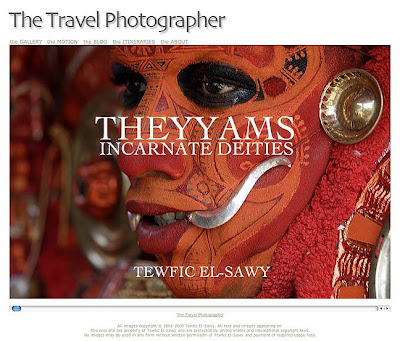 One of the most personally rewarding photo~expeditions I organized and led was the Theyyams of Malabar this last February. There are many reasons for this; the synergy between the 9 photographers in the group worked exceptionally well, the pace of the photo expedition was just right, and I fulfilled the ambition of photographing the Theyyam ceremonies over the 5 days we spent in northern Kerala.

To the people of northern Kerala, rituals are enormously important. Theyyam, a word that derives from daivam, meaning "god," is practiced mostly within the so-called "lower" castes of that region. To call it a ceremony would not quite be the word for it, and to name it ritual would only be half right. It is 2000-year-old theatrical performance in which an artist becomes divine and is in incarnated with that deity’s power. The gods and goddesses of Theyyam are not inanimate idols; they are incarnated in the bodies of the artists/performers.

The preliminary ritual is called Thottam, and takes place in the temple's shrine. It is then and only then that the artist receives the deity’s spirit. The deity’s makeup is called "body writing" and is said to have magical and medicinal properties. During the Theyyam the deity converses directly with the devotees, giving blessings, receiving homage and donations, and dispensing advice.

For another interesting post on the background of Theyyam on my blog, go here.

If you missed the verdict on the Theyyam of Malabar photo~expedition, go here and here.
Posted by bella at 4:00 AM