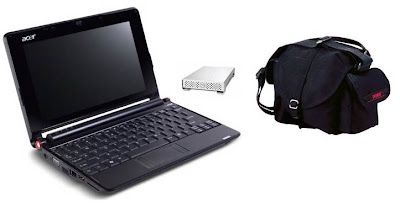 I'm planning to travel to Cairo for around 10 days, and finally took the plunge in reducing the load of photographic gear I normally take with me. Since the trip is not one of my group photo~expeditions nor a workshop, but will involve a couple of self-assignments, I can afford to pare it down.

1. Acer Aspire One 8.9-inch Mini Laptop (1.6 GHz Intel Atom, 1gb RAM, Windows XP) on which I downloaded Soundslides (my favorite slideshow maker), Audacity (free audio editor) and GIMP (instead of power-hungry CS). I may add Lightroom but download it on a memory stick. I'm a hard-core Mac user, so I'm still very uncomfortable using XP, but the netbook's feather-like weight is incredible. The display while small, is magnificent and I look at it as a souped-up Epson P7000 at less than half its price.

I read on the internets that hardy souls install OSX on it, but that's above my tech pay grade, so I'll keep using the XP for a while.

2. A 250gb G-Tech Mini G-Drive External Hard Drive with both FireWire and USB 2.0 for increased portability. I formatted it be used for both Mac and Win, and it works like a charm. It's a tiny little thing, that weighs less than 9 oz.

3. My new Domke F3-X will take the above gear, plus my Canon 5D2 and two lenses (I'll leave the 70-200mm 2.8 behind), and my Marantz PMD620 audio recorder. It has other pockets in which I can put mt CF cards, and whatever other whatsits I carry with me. All I need to do is to put it in a washing machine and dryer, and it'll be broken in just fine. Maybe cover the Domke logo with gaffer tape, and I'm set to go.

I just read this in the New York Times:

Apple’s COO Tim Cook :“They have cramped keyboards, terrible software, junky hardware, very small screens, and just not a consumer experience, and not something that we would put the Mac brand on, quite frankly. And so, it’s not a space as it exists today that we are interested in, nor do we believe that customers in the long term would be interested in. It’s a segment we would choose not to play in."